Bulldozers, Homelessness, and Hate Speech: A Week in the Life of the Roma in Turin 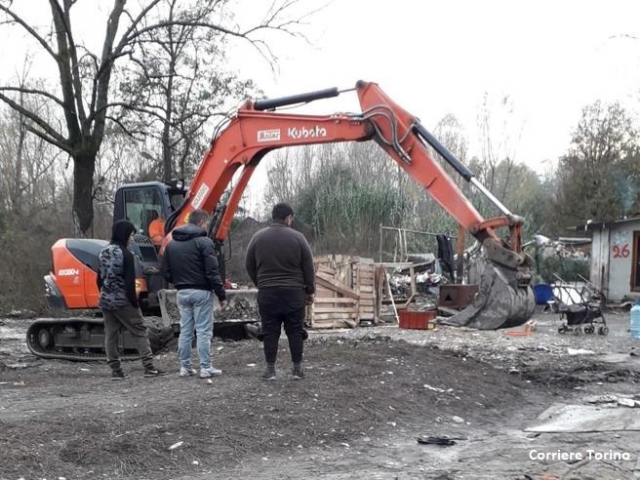 The Italian city of Turin, famous for its art galleries and baroque architecture, its eponymous shroud, and as the home of Juventus FC, is becoming increasingly infamous for its growing intolerance towards Roma. A series of arson attacks against Romani families in the last two years were the flashpoints which made the headlines against a backdrop of regular forced evictions, anti-Roma policies, hate speech, and police harassment which rarely make the news outside of the city.

In the last week, the bulldozing of the formal camp at Via Germagnano was met with concern from a local news outlet – not in relation to the wellbeing of the homeless Roma – but over the possibility that the evicted Roma might instead occupy public areas and empty houses in the nearby area after the clearance of the camp.

On the 20th November demolition equipment arrived at the formal camp accompanied by the local police on the authority of the municipality. By the morning of 21st November 28 homes had been destroyed and the families who lived there evicted. Alternative accommodation was only offered to a few families, the majority of those evicted ended up on the street. The Mayor of Turin, Chiara Appendino, commented that “legality had been restored” to the area and described it as “an historic achievement” which will result in “freeing up spaces for redevelopment.” The demolished homes represent about 1/5 of the total number at Via Germagnano. There are still some 500 Roma living nearby in informal homes built up around the area of the former official camp.

In the same week Daniel Cannati, a from the far-right Lega party, publically protested against the placement of a Romani family in social housing in the town of Beinasco, on the outskirts of Turin province.

“We are very worried about what is happening. It is the second allocation of social housing to a Roma family in over a year and a half. Since last June, several nomad families have returned to settle in the lands near the cemetery of Borgaretto…” he said.

The family had been living in a camp near Borgaretto cemetery, on the edge of BeinascogIt’s , which was demolished by authorities on 7th March 2018. The Municipality announced that the family had been on a waiting list for social housing since 2013.

Nothing outside of the norm for this city or indeed the Piedmont region, where anti-Roma sentiment has always been high. A reality which was further cemented by the far-right, anti-Roma Lega party winning almost half the seats in the regional council in the May 2019 elections.

The Lega have built much of their political success off the back of anti-Roma and anti-migrant rhetoric, and the rise of far-right populism in Italy over the last few years has only emboldened racists in the Turin and elsewhere. In May 2018 a Romani family living in a camper van in the region were attacked in the night and their home set ablaze by a Molotov cocktail. The police hypothesised it must be because of some Gypsy feud, and no one was ever brought to justice. In March 2018 the police were used by Beinasco municipality to illegally evict five Romani families by threatening to take their kids away if they did not immediately leave. The families had already been forcefully evicted from land that they legally owned in 2017, and a lawyer in contact with the ERRC had managed to postpone a second eviction when the police arrived to do the job themselves using their own illegal methods.

Police harassment and forced evictions of Roma are leftovers from Prime Minister Berlusconi’s 2008 – 2011 “nomad emergency” which, despite being declared unlawful by the State Council and the Italian Court of Cassation, continued in practice across the country until today. The apparent defeat of Matteo Salvini’s Lega with the formation of the new coalition government on 5th September 2019, has had little effect on the systematic rights abuses faced by Roma in Italy on a day-to-day basis. Forced evictions and the creation of segregated formal camps continues up and down the country regardless of the political machinations in Rome. Turin is no different in this respect, but the frequency of such actions combined with a high level of societal antigypsyism make the city an increasingly inhospitable place for Roma to live. From state persecution of ‘nomads’, who are shunted from one slum to another through systematic forced evictions, to random unprovoked attacks on Romani individuals by racist members of the public; Turin is developing quite a reputation for being a nasty, racist, little city when it comes to Roma.