Anti-Roma racism beyond COVID-19: Which side are you on?

Reality has long since dumped on the notion that the coronavirus is the great equalizer; worldwide, this pandemic exacerbates inequalities and continues to exact a grimly disproportionate toll on vulnerable, marginalized and rights-deprived communities. The plight of impoverished Roma living in overcrowded settlements without proper sanitation, and exposed to police brutality, has been compounded by lockdowns which cut off vital sources of income. Catastrophe looms, and the shocking vulnerability of such communities is a direct consequence of structural racism. So, it should come as no surprise that in some EU Member States, anti-Roma racism has been a feature of the policy response to COVID-19.

What kind of Europe?

What is to be done when this viral threat to the ‘European way of life’ starts to recede? There is little evidence that a more caring, sharing society – where social solidarity will displace social distancing – will emerge of its own accord. Lessons to be learned about putting equity first could well go unlearned, without concerted political action. Nativist authoritarians thrive on fear and uncertainty, and democrats must deny them the opportunity to exploit this crisis. There can be no room for ‘racism as usual’ when the new normal begins to kick in. So, what is to be done?

The question should not be directed primarily at Roma activists, who have done everything under the sun over recent decades. They’ve engaged in grass-roots community-based activism; repeatedly taken to the courts in pursuit of justice; invested much time and effort in national and international ‘evidenced-based advocacy’; networked, lobbied, submitted countless recommendations to the relevant responsible authorities; formed coalitions and alliances, picketed and protested, reasoned and rallied against racism and injustice.

Right now, as Europe prepares to pick up the pieces, it would be more apposite to shine a light on what non-Roma are doing; especially those who wield power and privilege, who consider themselves to be liberals, progressives, or position themselves on the side of the angels: what are they doing to dismantle the structures and break the habits that reproduce the racist suppression of our Romani fellow citizens?

Anti-racism must be the starting point

In the face of a toxic and virulent racism that insults the dignity, and imperils the security and well-being of millions – a racism undiminished and unabashed, despite a 20th Century history of erasure and genocide – the message for Europe post-COVID-19 is simple: it’s not enough to be non-racist, anti-racism must be the starting point; and those who choose to remain silent, or just can’t be arsed, stand accused of complicity.

In a time of radical malaise, when race-baiting has become a mainstream political past-time on the right, it’s not enough to harbour a passive and private moral distaste for extreme forms of racist behaviour against Roma. These days call for an active rejection of the systemic oppression that arises out of institutional and structural forms of racism. 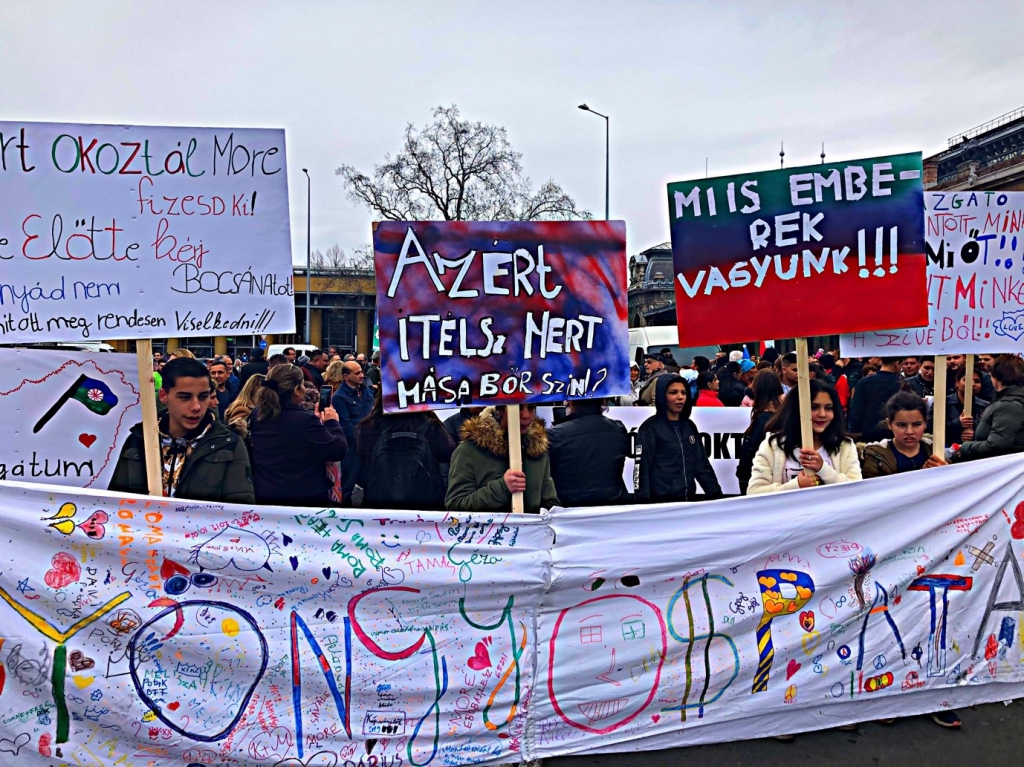 The burden of responsibility

Let’s be clear, Roma-led activism is the way forward for emancipation, but the burden of responsibility to dismantle racist injustice lies with those who wield power and privilege. As the powerful are unlikely to do so of their own accord, at the ERRC we assert that they must be pushed and prodded; they must be sued and shamed; those who wield power for unjust ends must be publicly and forcefully held to account by all means necessary that are consistent with non-violent struggle.

In the broader political and social context, mobilisation and struggle to ‘stress the system’ and fight against all forms of injustice is more critical than ever. At every intersection in such struggles, social movements and political formations which profess to be inclusive and concerned with deepening democracy, need to reflect just how inclusive and empowering they are when it comes to the fundamental rights of Roma.

Similarly, public authorities, parliamentary groups and international agencies that claim to be liberal and enlightened, need to interrogate their structures and operations to root out the whole gamut of rotten practices that have side-lined, trivialised or marginalised Roma.

It is a tragedy that it’s still necessary to insist that Roma rights are human rights, and that Roma lives matter. In 2020, if your liberal agendas fail to register these basic truths, then they are unworthy of the moniker ‘liberal’. If after all this time, your enlightened organisations – whether wittingly or unwittingly – remain hostile environments for Roma, and ambivalent on the ethical imperative to combat antigypsyism and all forms of racism, then clearly, you’re still part of the problem.

In an era where politics and public discourse have become distorted by strident nativism and crude revivals of old hatreds, there is no room for ambivalence – those who enjoy privilege and exercise power need to fully ingest the old adage that “Injustice anywhere is a threat to justice everywhere”.

There is no trickle-down: the big lie of colour-blind incrementalism

Now is a good time to confront the limits of cautious, incremental social inclusion policies, and to disabuse ourselves of the notion that the Race Equality Directive, infringement proceedings, Commission Communications or parliamentary resolutions from Brussels or Strasbourg, will make much of a difference to the lives of millions of Roma.

Patiently waiting for policy frameworks, funding mechanisms and inclusion strategies to embed themselves in the common sense of everyday politics is just not an option. Neither is it ethically feasible for colour-blind power brokers to continue to deny the salience of racism, by pushing the line that if we just try to alleviate poverty in general, issues around anti-Roma discrimination in particular will somehow sort themselves out.

This weirdly ahistorical notion posits that there could be some trickle-down in terms of access to public services, educational and employment opportunities to the Roma if ‘things just got better for everyone’; and that the structural racism that blights Roma lives would vanish like the morning mists. This softly-softly approach, so gradual and incremental that it might slip through the policy approach unnoticed, is one favoured by centrists and their pundits, who don’t want to upset their white electorates.

Caught like rabbits in headlights, paralysed by the surges in electoral support for far-right nativists, they forever caution against ‘backlash’ and stirring white resentment through policies of ‘positive discrimination’. The best they can do is trot out feeble platitudes about the virtues of ‘mainstreaming’ – a term which has been distorted into an excuse to do nothing that might actually make a difference.

From another time and another place, Martin Luther King noted with some regret that the great stumbling block in the stride toward Black freedom is not the Klansman, but the white moderate, “who paternalistically believes he can set the timetable for another man's freedom; who lives by a mythical concept of time and who constantly advises the Negro to wait for a ‘more convenient season’.” King’s frustration with “shallow understanding from people of good will” and their lukewarm acceptance, was compounded by the disappointment that so few white people had “the vision to see that injustice must be rooted out by strong, persistent and determined action.”

This is not a counsel of despair, rather a call to action for all right-minded people. Combating anti-Roma racism must be at the heart of all struggles against injustice, social inequality and discrimination. The cause of Roma rights needs to be embraced by all who campaign for human rights and against discrimination, by all who champion a democratic politics of hope not hate.

Before the lockdown, Hungarian Roma took to the streets of Budapest in antifascist demonstrations and to lead protests against Prime Minister Orbán and his campaign to stir up anti-Roma sentiment and undermine a court ruling on school segregation. The Roma have been further vindicated by the victory in the Supreme Court. It has been 20 years since the first Romani-led grass-roots school desegregation campaigns began in Bulgaria, Hungary and Romania. Years of community-based activism, combined with strategic litigation and advocacy campaigns forever changed the terms of the debate.

From a time when faux liberals cautioned Roma activists against being too ‘confrontational’ or even using the word ‘desegregation’, this demand is now part of the mainstream European policy agenda; has been vindicated repeatedly in the European Court of Human Rights; and is the subject of ongoing EU infringements against three member states.

However, the fact that in 2020, Roma have to take to the streets to protest against this abuse of their children’s basic human rights gives a sense of just how asymmetric and protracted is the struggle against anti-Roma racism in the nation states of modern Europe.

The renewed willingness of increasing numbers of Roma to get up, stand up, and protest in cities across Europe sends a clear message to all, as societies edge towards a new normal and people get outdoors again: racism must be confronted on the streets, in the media, the arts, the courts and the legislatures. The way forward lies in broad-based mobilisation and everyday solidarity to actively disrupt hate and racism in all its manifestations.

And this struggle will become more urgent in the post-pandemic recovery, to combat what has been called, with bitter irony, “the last acceptable form of racism in Europe”.  Cornell West reminds us that “love is what justice looks like in public”. When it comes to love and justice, there are no neutrals there. For all right-minded people, now is the time to declare which side are you on?