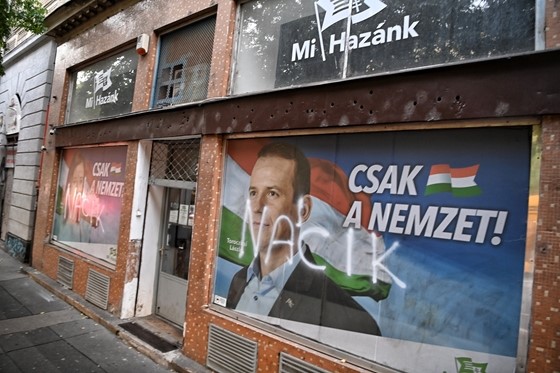 The Józsefváros Municipality in Budapest’s 8th District has just set an example for Europe about how to deal with neo-fascists. Just days after the far-right Mi Hazánk displayed a crudely racist anti-Roma poster in their office window, the municipality unanimously voted to terminate the party’s lease and revoked their right to use the office in downtown Budapest.

As reported by Mérce.hu, on Saturday 2 October, an anti-Roma poster was placed on the front door of the office of the neo-fascist Mi Hazánk Mozgalom (Our Homeland Movement) in downtown Budapest. Bearing the party logo, the poster declared that ‘We cannot be a gypsy country’.

In a Facebook post, the Roma civic group 1Magyarország Kezdeményezés (1Hungary Initiative) condemned the poster as a ‘disgusting’ affront to the human rights and dignity of Hungary’s Romani citizens; described it as “clear and open hate speech, pure, Nazi, fascist-based rhetoric, which in this form clearly qualifies as incitement”; and called for its immediate removal. The office is owned by the local government of Józsefváros, Mi Hazánk rented the room from the district. 1Hungary demanded that the municipality take immediate action, and the civic group also announced their intent to take legal action against the far-right extremists for incitement.

Balázs Sátly, head of the opposition parties faction in the Józsefváros district, announced that he would initiate a review of the Mi Hazánk office lease at the next meeting of the municipal ownership committee. He declared that the local government cannot tolerate common municipal property being used to incite hatred against Roma or any other minority community. In response, András Pikó, the mayor of Józsefváros, agreed strongly with Sátly, that this situation was intolerable and said “let’s do our thing!”

They proved as good as their word and as reported in HVG, the Ownership, Wealth Management and Public Land Utilization Committee of the Józsefváros Municipality revoked the right to use the office of the Our Country Movement with a unanimous decision on Wednesday 6 October. The committee terminated the lease agreement with the party for the office at 43 József körút.

Before the vote, in response to the word Nazis being graffitied on the display windows of the Mi Hazánk offices, MP Dóra Dúró condemned the local government and left-liberals for harassment, and reiterated that while Fidesz have declared that Hungary will not become a country of migrants, Mi Hazánk is the only party prepared to speak up against Hungary becoming a ‘Gypsy country’. Thousands of these racist leaflets have been printed and will be distributed to homes across the country. It is clear that for the 2022 elections, while the movement’s National Policy Cabinet is not yet ready with ‘the full program’, incitement to racial hatred and full-on antigypysism will be front and centre of the Mi Hazánk election campaign.  One thing is clear however, they won’t be operating out of their former HQ on 43 József körút! 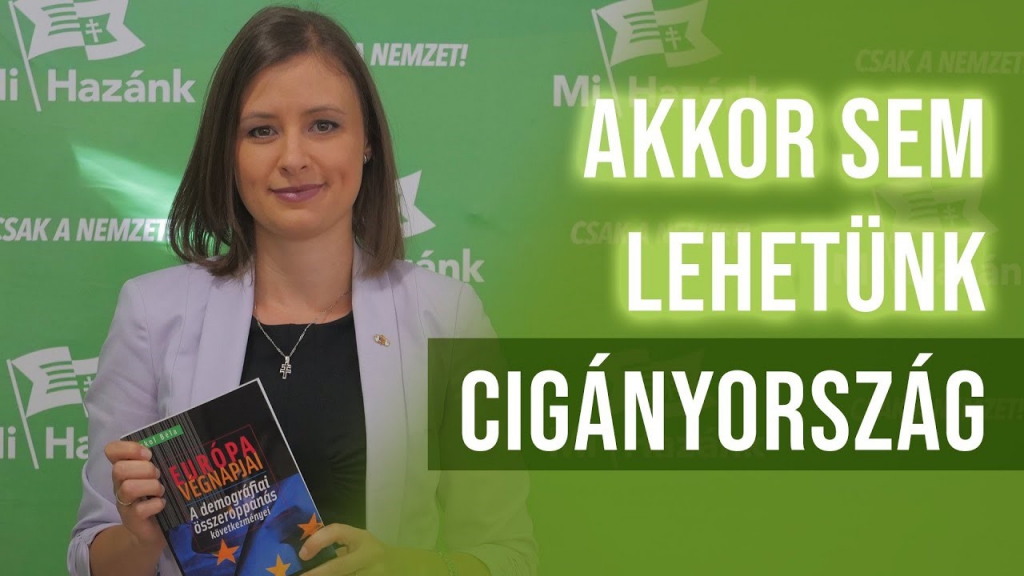 Mi Hazánk: the party behind the politics of hate, homophobia and anti-Roma racism

In June 2018, the breakaway Mi hazánk mozgalom (Our Homeland Movement) was launched by former Jobbik MPs, László Toroczkai and Dóra Duró. Both had been expelled from the party as Jobbik attempted to rebrand itself as a ‘normal’ patriotic party by outwardly shedding the racism, fascism and homophobia that made it such a hit among 20%-plus of Hungarian voters. Mi Hazánk remained true to such core values, Toroczkai proclaimed that Hungary should remain a ‘white island’ in Europe and Duró stated, “Instead of the confusing Rainbow flag, we want the Hungarian tricolor”. Mi Hazánk ran candidates in the 2019 European elections where it secured 3.29% of the vote.

Their election manifesto was a mix of anti-migrant Islamophobia, hostility to the ‘mixing’ that dilutes Christian culture, and nonsense about “preserving values and glorious spiritedness inherited from the ancient Hungarians of the steppes” and the new notion of the Northern Civilization, stretching from Kamchatka to Reykjavík.

As for the racist take on the so-called ‘Gypsy Question’, the Mi Hazánk manifesto stated, “It has to be declared that the integration of Gypsies, as old immigrants, has not been successful and their baby booming threatens the national budget.” Drastic interventions promised include “the need to fight against all aspects of Gypsy delinquency and the problem should be settled by strengthening the police and supporting voluntary self-defense associations … Limiting childbearing for only subsistence purposes is of key importance to the future of Hungary.”

Since it was founded, Mí Hazánk has made its mark in word and deed, with a steady stream of hate speech against ‘faggot propaganda’, marching in uniforms on community spaces – repeatedly targeting the Auróra Centre – burning rainbow flags, and staging intimidatory disruptions of LGBTQ events.

In September 2020, MP Dóra Dúró, posted a YouTube video of herself shredding a copy of a newly-published children’s book Fairy Tales for Everyone at a press conference. The Mí Hazánk leader and proud mother-of-four declared that ‘Fairytale Land’ does not belong to ‘aberrals’; that her party “will not tolerate exposing children to homosexual propaganda, and that homosexual princes are not part of Hungarian culture.”

Dúró’s book-shredding stunt was followed by a hundred-strong far-right rally outside the offices of the Labrisz Lesbian Association on 3 October 2020, where Mí Hazánk leader László Toroczkai told the mob that the “LGBTQ virus” was more dangerous than the coronavirus. Publicist Árpád Szakács, a regular contributor to pro-government media, described LGBTQ activists as jackals who attack families, and called for the creation of Polish-style “LGBTQ-free zones”.

In 2019, the UN Committee on the Elimination of Racial Discrimination (UNCERD) expressed deep concern at the operation of organizations that promote and incite racial hatred in Hungary, and ‘deep alarm’ at the prevalence of hate speech targeting Roma, migrants, refugees, asylum seekers and other minorities. The committee expressed further concerns at the lack of government action to prevent incitement to hatred generated by these organisations and called for them to be banned. UNCERD’s recommendations went unheeded by the regime.

Mi Hazánk falls into the category of organisations that pose a danger to minorities.  Even if their showing in the polls proves to be derisory, the threat from this far right movement and its paramilitary fellow-travellers is extra-parliamentary, its currency is prejudice and fear, and it has Hungary’s Romani and LGBTQ citizens in its sights. The Józsefváros Municipality is leading by example, we hope others will follow to show zero tolerance for racists in public life.