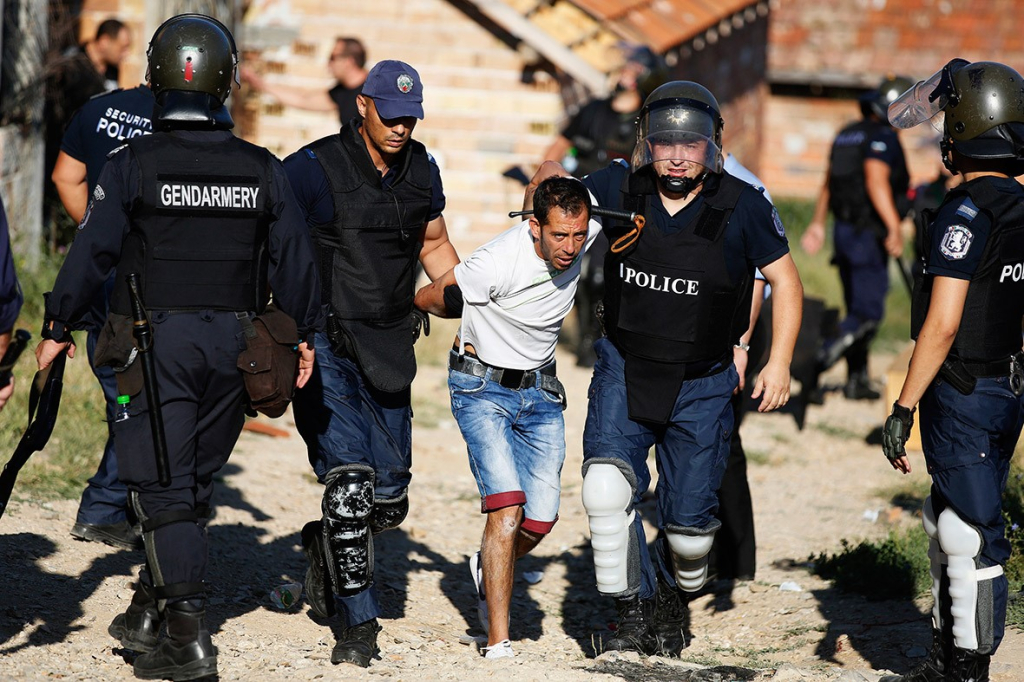 The Strasbourg committee is very concerned about antigypsyism, mob violence targeting Roma communities, school segregation and hate speech from high-ranking politicians. But why is there no mention of police brutality and racism against Roma? And why is ECRI pulling its punches on recommendations for ‘priority implementation’?

In its latest report on Bulgaria, the European Commission against Racism and Intolerance (ECRI) described Roma and LGBTI persons as the main victims of public expressions of hatred and prejudice often by high-level politicians. Noting that both communities have come under violent attack, with Roma targeted by mob protests which led to the demolition of Roma houses, ECRI stated that, “the positive steps taken to counter antisemitism have unfortunately not been applied to these types of hatred as well.”

ECRI strongly recommended that the authorities take all necessary measures to prevent threats and violence against Roma by groups of local residents; urged that Romani homes be protected from illegal demolitions; and called on the authorities ensure that no de facto segregation of Romani children takes place in kindergartens and schools.

But the only Roma-related recommendation singled out for priority implementation in ECRI’s process of interim follow-up, is that the Bulgarian authorities “scale up the successful work of Roma mediators in the areas of health, education and employment.” It will take far more than mediators to combat antigypsyism, even the European Commission has acknowledged that racism is structural and must be addressed at all levels of governance, including law enforcement, “to turn the tide”.

What’s baffling is that, despite the wealth of evidence, the ECRI report steers clear of police violence against Roma. There is mention of the lack of dedicated hate crime units which can serve as a permanent link between police and the most affected communities. But nothing on the hate that comes directly from coppers.

As for COVID-19, the hardships endured by socially marginalised Roma during lockdowns were noted, but there was not a word about the disproportionate police actions, quarantines, curfews, and blockading of Romani neighbourhoods.

The over-securitised and ethnic-specific approach – unrelated to actual infection rates – was harshest in Yambol, which was fully quarantined and blockaded for 14 days. On the morning of the 14th May 2020, a helicopter sprayed nearly 3,000 litres of detergent to ‘disinfect’ the Romani neighbourhood.

Anti-Roma hate speech in high places and repressive police actions prompted international outcry. UN Special Rapporteurs on racism warned that “authorities should not exploit the pandemic to further exclude Roma and portray them as criminals and contagious”, and described law enforcement operations against Roma as a violation of the principles of non-discrimination and equality. They concluded:

“Racial discrimination and racism within state institutions is a reality that Governments should not deny. The Bulgarian authorities must condemn this and any other conduct that targets Roma and other minorities on an ethnic or related basis.”

A virtually unchecked culture of violence within Bulgarian law enforcement

According to the 2020 report, Guilty by Default, Roma in Bulgaria were twice as likely to be the victims of physical police violence than non-Roma. Findings showed that one third of the respondents (34%) reported physical mistreatment, either during apprehension or during detention at police stations. The survey also showed that that minors are particularly affected by police mistreatment: 66.6% of all minors interviewed reported physical violence during apprehension.

From ERRC’s report, Brutal and Bigoted: Policing Roma in the EU, It is clear that Roma in Bulgaria are disproportionately represented within the criminal justice system in terms of being ethnically profiled, detained, and imprisoned. All the available research suggests that Roma are disproportionately at the receiving end of torture and ill-treatment during arrest and detention, and thus more likely to become victims of a virtually unchecked culture of violence within Bulgarian law enforcement.

As to that culture of police violence, the Committee of Ministers of the Council of Europe in response to the systematic failures of Bulgaria to implement ECtHR judgments, noted in 2020 that there had been no progress on introducing the crime of torture in criminal law, and no effective investigations concerning “deaths, ill-treatment including torture or lack of timely medical assistance during arrest, in police detention or in penitentiary facilities.”

In its most recent report on Bulgaria, the UN Committee against Torture (UNCAT) expressed its concerns about police torture, routine brutality, and complete impunity, and urged the Bulgarian State to: “take concrete steps to ensure that members of the Roma community and other vulnerable minorities and groups are not singled out and ensure that the excessive use of force against members of such communities by law enforcement officials is promptly and impartially investigated and the perpetrators prosecuted and punished; provide remedies and redress to victims afforded by the Convention, including for reparation and damage.”

ERRC mapping and monitoring shows that police brutality against Roma is commonplace right across Europe. As is the collusion and complicity of institutions in their denial of racism; their indifference to the plight of victims of brutality; and the wilful cultivation of a climate of impunity among law enforcement agencies when it comes to policing Roma. In this context, the silence in the ECRI report about police violence against Roma in Bulgaria is deafening; and the recommendation that Bulgarian authorities merely “scale up the successful work of Roma mediators in the areas of health, education and employment”, could – to coin a cliché – be likened to sticking a band-aid on a gaping wound.