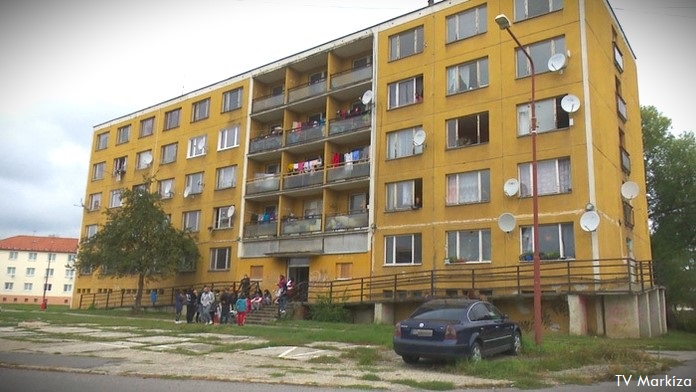 At the beginning of November, the Veľký Krtíš District Court ordered the municipality of Veľký Krtíš to provide access to water twenty-four hours a day to its tenants, who have been living in inadequate housing conditions for years. All the residents of the house are Romani and the ERRC has been supporting them for years in their fight to improve their living conditions.

The recent interim measure ordered by the court is finally a step in the right direction in the struggle of Romani tenants who have been living in poor conditions in a municipality-owned house for years. In 2020 the ERRC, alongside local activists, began to assist the 130 Roma, including 70 children and many elderly and vulnerable adults, who had been living without warm water or heating, enduring a leaking roof, broken windows, mould on the walls, insects, and many other issues. The municipality’s response to the request to improve living conditions at the time was to evict the families without offering them any alternative places to live. The residents of the house received the eviction notice on 25th September 2020, which informed them about the termination of their rent as of 31st October 2020, and the shutting off of the heating. The official reason for the eviction was the poor conditions the families were living in and the substandard state of the building.

The ERRC first filed a complaint with the Slovak Ombudsperson, who declared in findings in 2021 that the municipality had violated the right to adequate housing of the Romani inhabitants of the residential block. While it was an important victory at the time, the legal fight continued in order to prevent the eviction of the Romani tenants. Since the summer of 2021 the ERRC has assisted in providing legal representation to 13 families undergoing eviction proceedings. As of summer 2022, the court has ordered the municipality to provide the families with alternative accommodation, before the eviction was carried out in five of the cases. In one case the parties concluded a friendly settlement. Several proceedings are still being considered by the Banská Bystrica Regional Court (appeal court).

Despite originally deciding to evict the tenants, citing the poor conditions as the reason, following the court orders the municipality has changed their mind and is no longer going ahead with evicting the families who are entitled to alternative accommodation. However, they have also failed to do anything to improve the living conditions for the families. In fact, conditions have been deteriorating further, with residents deprived of proper access to water and heating. Since January, the only water source in the house has been accessible for just one hour per day. The tenants have requested unrestricted access to water from the municipality, as well as information regarding alternative accommodation, but have not been provided with either.

Due to these ongoing issues three elderly tenants, who have no debts towards the municipality and suffer from several health issues, initiated legal proceedings against the municipality for keeping them in inadequate housing conditions. Their legal representation was secured by the ERRC. The tenants claim that the housing conditions violate their human dignity and right to private life and asked the court to order the municipality to provide them with decent housing, as well as compensation for non-pecuniary damage. They also requested the court to issue an interim measure ordering unlimited access to water.

At the beginning of November 2022 the residents of the house were granted the interim measure ordering the municipality of Veľký Krtíš to provide 24/7 access to water to the tenants. Within a month, the municipality complied with the measure and provided access to water. This is a real success in the drawn-out process of achieving justice for these Roma, and the ERRC hopes that the residents will also soon be provided with alternative, appropriate accommodation.