Despair in Stara Zagora as Roma family homes are demolished 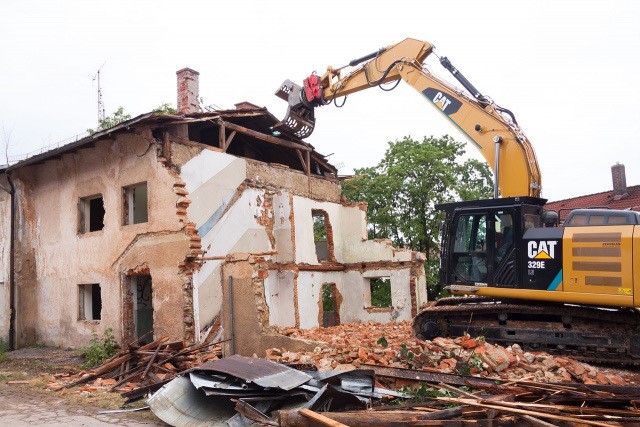 By Atanas Stoyanov
A moving report from the ground by ERRC’s monitor Atanas Stoyanov, witnessing the distress of Romani families as their homes are demolished by local authorities in Stara Zagora.

The day is August 4, just two days after we marked Roma Holocaust Memorial Day, and paid tribute to the hundreds of thousands of Romani children, women and men wiped off the face of the earth in the Nazi-orchestrated racist genocide.

This Tuesday morning is different for Roma living on Vitosha Street in the Roma neighborhood of Lozenets, Stara Zagora, Bulgaria. They are waiting for the municipal excavators to demolish the only homes they own.

Upon entering the neighborhood at 8 o'clock in the morning, I found people rushing about frantically. They had demolished their houses themselves to take the bricks and whatever else could be used. The women collected the furniture, with the swollen eyes of people who have not slept from anxiety and worry. They were in a hurry because the excavators would come at 9 o'clock and the demolition would begin. The tension in the air could be strongly felt and cut with a knife, and it felt like I was attending a funeral. The inhabitants were in mourning, facing the imminent loss of their homes; something they knew they would have to come to terms with, but right then, there could be no reconciling with this loss.

Police cars began to arrive. Then came the gendarmerie, dressed in uniforms, walking in line in front of the houses of the Roma, which were to be demolished. They also brought police dogs with them, as if the trauma they were inflicting was not enough. I thought to myself, this is what round-ups must have looked like 76 years ago.

Minutes before 9 a.m. everything was in place for the demolition drama to commence. The excavators were lined up and ready. Huddles of evicted people, beside their piles of belongings and pieces of furniture, waiting to see 30 years of their lives disappear into dust. Nearby, journalists gathered, waiting for the arrival of the mayor and his henchmen; waiting for a statement from Mayor Zhivko Todorov, who, at the scene of house demolitions last year, declared that his vision of Stara Zagora “does not include a Gypsy ghetto”. Police guard the journalists and none of the Roma are allowed to speak to them; nobody even asks them for a word about what’s going on.

At 9 o'clock on the dot, the demolition commences. Sobs fill the air, and women who quietly whisper, "I'm sick," and feel faint are comforted by others who bring them water and soothe them. Children telephone from abroad to ask their parents how they are, and the parents despite their distress, calm them down and say that everything will be fine.

The mayor is visibly pleased. He has proven once again that he is more than willing to take a hard line with the Roma. Now, the voters will surely love him more, including the rich in their illegally-built, walled-off seaside mansions and villas. Under the table payments have ensured that these dwellings won’t ever face the wrecking ball. It’s different in the Roma neighbourhood, with barking dogs and gendarmes, tears and swearing. Thanks to mayors like Todorov, Roma face increased poverty, hardship and hostility, and blamed for their own misfortune. As the demolition takes place I hear Roma quietly curse the mayor in desperation, “May you never again see the light of day”.

The Roma have lived in this neighbourhood for 30 years now. They have been paying for electricity, water and all the other bills. From 1990 to 2005, houses were built without any problems. The old mayor told them: vote for me, while I'm in power, there’s no need to worry. All god and fine, but the old mayor is long gone. He died tragically, trapped under a tractor while driving drunk. And the new mayor? This latest forced eviction is his fourth in a row. There were demolitions in 2014, 2018, 2019; and now, the latest in this time of the pandemic brings the total up to 300 houses. At least 1,500 broken dreams and lives.

All sorts of things were reported in the media about this eviction. That the land was being sold to Roma, but they did not want to buy it. That there is social housing available, but the Roma did not apply for it. In fact, the better-informed Roma actually sought to purchase the land on which the properties were built, but received evasive and dishonest replies to their requests: the land is not for sale, and if the plots are for sale, they are put up for auction. Instead of an auction offer, a demolition order came.

They went to the municipality to apply for social housing. At the counter they were asked if they worked, and when they answered no, they were told it made no sense and weren’t even given application forms.

The municipality had warned them about what was coming in September last year. They were even told that if they wanted, they could buy land elsewhere and start building there. But who with any sense would buy plots of land where there is neither water nor electricity?

I left, as if after a funeral. I posted a small part of what’s written here on my Facebook wall to vent the raw grief felt on the ground here in Lozenets; to share the injustice suffered by these people. Trolls commenting on my post suggested that I should: "Stop defending the gypsies," because "their houses are illegal," and anyway "they are to blame."

Maybe these dwellings are illegal. But, for years these are people have been manipulated by local politicians, and utterly neglected by the local administration. These children, pregnant women and adults cannot sleep on the street under the stars. This is completely inhumane – no child should be punished for their parents' legal mistakes, especially when such oversights had been acceptable for 30 years.

As COVID-19 continues to spread in Bulgaria with the total number of cases topping 13,000, these vulnerable people need humanity and support. Instead on August 4, the municipality has acted once again with cruelty and malice, come to the Roma neighbourhood with bulldozers, dogs and gendarmes, and left nothing in their wake but ruins in the dust.