What depth of racism, laced with cruelty and spite, drives municipalities to cut off water supplies to Roma communities in the middle of a blistering heat wave? These are not one-off acts by rogue mayors but symptomatic of a much wider abuse of the basic human right to clean water and sanitation – and a very vivid example of how the scourge of antigypsyism blights Romani lives.

The Roma Civil Monitoring Reports confirm earlier findings by ERRC of the shocking disparities and discrimination faced by Roma. Even where safe water supply and sanitation services are available to almost every non-Roma household, many Roma populations cannot access these basic and very essential services. In the Czech Republic, Hungary, Slovakia, Bulgaria and Romania, everyday life is rendered miserable for thousands of 21st Century EU citizens, because they don’t have an indoor flushing toilet to shit in, can’t take a hot shower, or drink clean water from a kitchen tap. 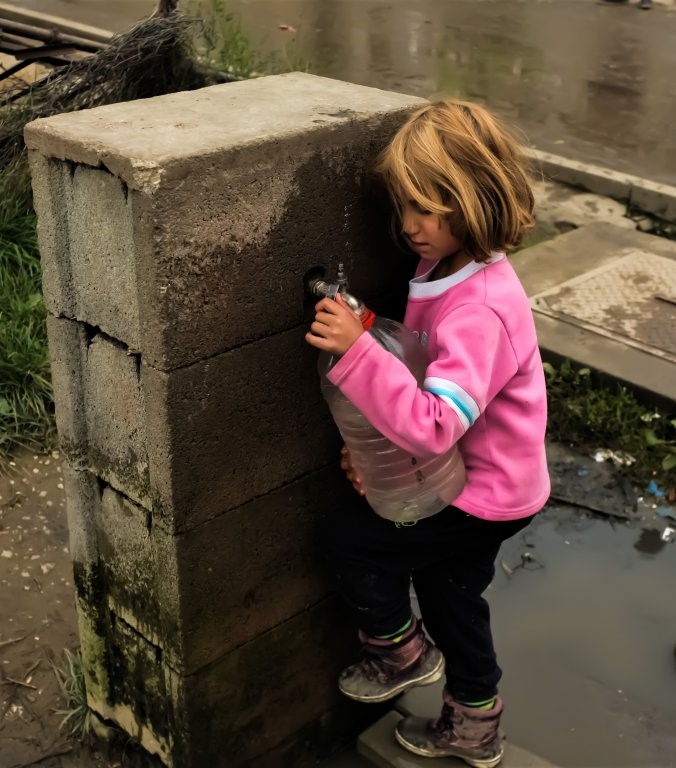 Thousands of our fellow citizens have to cover significant distances to the nearest water sources, which are all too often exposed to a host of contaminants, including insects and wild animals. Even in neighbourhoods where water supply infrastructure is available, Roma often cannot afford to pay connection and regular usage charges.

One illustrative example is Prášnik, Slovakia, where the Roma settlement, smack in the middle of town is the only neighbourhood without water, while scattered gadjo neighbourhoods on the outskirts and in the mountains are all piped up and connected. The Roma have to fetch their water from an unprotected mountain stream, which regularly freezes in the winter. What’s even more blatantly unjust is that this is a relatively prosperous spa town, which has attracted outside investors who are constructing a satellite neighbourhood in the hills to accommodate foreign visitors who wish to take the waters. For this project, the town provided the investors with all necessary public infrastructure, including drinking water and sanitation pipes.

According to the Fundamental Rights Agency, the gap between Roma and the general population has remained highest in Romania, where, in 2016, 68% of Roma were living without tap water in their dwelling: “To put this in a global context, Roma in Romania – the country with the highest number of Roma in the EU – enjoy access to safe water in rates similar to those in Bhutan, Ghana or Nepal.”

And the issue is not confined to the newer member states of Central and Eastern Europe. Léo Heller, UN Special Rapporteur on the human rights to safe drinking water and sanitation, described how in Portugal, he found the living conditions of Roma “disconcerting and certainly comparable to the worst of situations I have seen thus far in previous missions to much less developed countries in Central Asia, Southern Africa and Central America”.

In Italy, the living conditions in both official and unofficial ‘nomad camps’ has long been recognised as especially precarious. As far back as 2005, research has shown higher incidences of asthma, diarrhoea and bronchitis among children living in the camps, and established the connection with overcrowding, rats, the presence of stagnant water, the state of the dwellings, the limited access to baths, and the lack of drinking water.

Since then, mass evictions have only served to exacerbate the situation. National and international organisations have documented the appalling living conditions inside ‘authorised camps’ – overcrowded, in poor state of repair, with ever deteriorating hygiene and sanitary conditions. Conditions in the segregated emergency shelters and unofficial camps are even worse in terms of access to clean water and sanitation.

The Civil Monitor report uncovered a disturbing trend in France where mayors and municipal staff, openly declared that if they offered sanitation services and facilities to dwellers in shantytowns, they could no longer proceed with speedy mass evictions. In these conditions, the Roma inhabitants have to trudge often long distances to transport water from pumps and fire hydrants.

Access to basic sanitation is an essential com¬ponent of living a decent existence, according to Article 34 (3) of the EU Charter of Fundamental Rights. The human rights to water and sanitation require that these services be available, accessible, safe, acceptable, and affordable for all, and that sanitary services provide individuals with sufficient privacy and dignity.

As things stand for many thousands of Roma denied access to such vital services, there is little privacy, and dignity is in short supply. Many EU member state governments and local authorities persist in their abject failure to recognize access to clean water as a matter of justice.

The UN 2030 Development Agenda is unequivocally anchored in respect for human rights, and Sustainable Development Goal Six (SDG 6) calls for universal and equitable access to safe and affordable drinking water, sanitation and hygiene facilities for all by 2030. It should be Europe’s shame that in this prosperous continent, SDG 6 will not be met by 2020. The absence of shame gives measure to the depth of anti-Roma racism that pisses all over so-called European values.