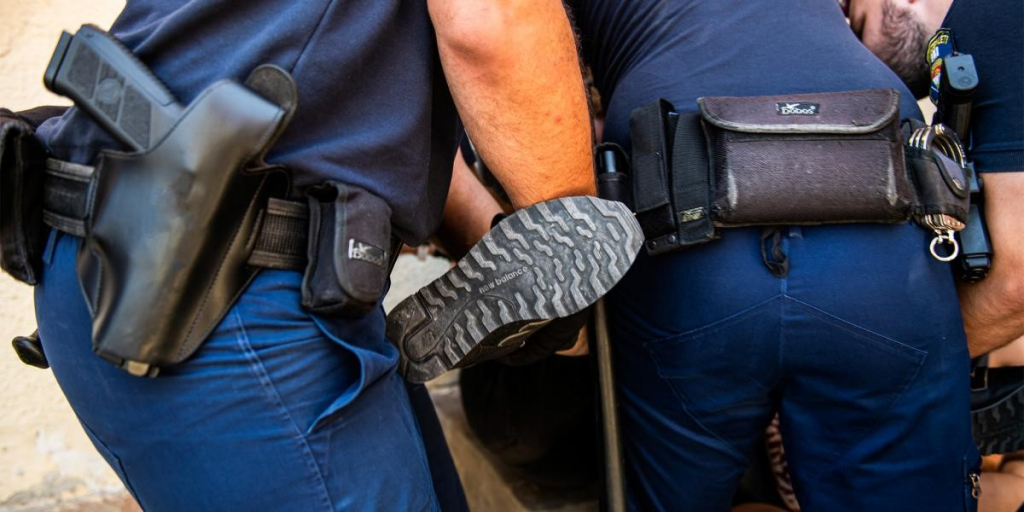 In yet another case of police brutality against Roma (Mata v. Hungary 7 July 2022), the European Court of Human Rights (ECtHR) awarded the applicant €19,500 following an incident back in 2014, when he was assaulted by Hungarian police officers.

The Hungarian Civil Liberties Union (TASZ), who represented the applicant, stated that their client was at a house party house in a village in Borsod-Abaúj-Zemplén County, when the police came after a report of a disturbance. When he remonstrated with the police for their rude and disrespectful treatment of the home owner, both men were taken to the Encs police station.

According to their client’s testimony, on the journey to the station he was racially abused; the officer diving the car said: “Dolgozol te a kurva anyádba, te köcsög buzi cigány!”, which roughly translates as “You work for your fucking mother, you bastard faggot gypsy!”. When their client indicated that the handcuffs were painful due to a recent wrist surgery, the police tightened them even more. Upon arrival at the police station, they sprayed him twice in the face with tear gas, then dragged him towards the back entrance and struck him several times in the chest and head.

According to the evidence presented to the ECtHR, on release, the applicant went to the local medical emergency point, where he was advised to present rather to the County Hospital: “In the medical report issued, the applicant was found to have contusions of the chest and an open wrist wound.”

TASZ stated that the unlawfulness of the Hungarian authorities is well characterized by the fact that “while our client was convicted of disorderly conduct, the investigation against the police was terminated.” At no stage did the investigation attempt to answer the question as to how their client’s injuries could have been caused differently than he claimed.

The ECtHR concurred and found that on the basis of all the material before it, “the Court therefore finds that the Government have not satisfactorily established that the applicant’s injuries were caused otherwise than by the treatment meted out to him in police custody. There has accordingly been a breach of Article 3 of the Convention in this regard.”

Following the ruling, TASZ lawyer Eszter Jovánovics said, "After six years of waiting, our client will finally receive just compensation for the racist abuse he suffered. This is the third case that TASZ has won in Strasbourg, in which police officers used illegal physical force against a Romani victim. We hope that these judgments will deter the police from similar serious violations of the law, and if such violations occur, the prosecutor's office will act more effectively, ensuring the basic human rights of the victims."

As evidence from the recent ERRC report, Brutal and Bigoted: Policing Roma in the EU, shows, issues around access to justice and anti-Roma racism run deeper than discrete incidents of police brutality. It is rather the case that law-enforcement agencies are institutionally racist; that antigypsyism is clearly evident in the ways Romani communities are policed; and that there is official tolerance at the highest levels of a culture of impunity within law enforcement when it comes to mistreatment of Roma.

The ECtHR has found in multiple cases that Hungary had violated the right to life or the prohibition of torture when failing to carry out adequate and effective investigations into allegations of ill-treatment by police officers.

One example is the Gubacsi v. Hungary group of cases concerning ill-treatment (between 2000 and 2016) by law enforcement officers during the applicants’ arrest, transfer, and detention, and lack of effective investigations, including failure to investigate possible racist motives for ill-treatment, and violations of the right to life in the same context.

Impatience with the Hungarian authorities’ foot-dragging concerning police brutality and the manifest failures to justly process complaints of ill-treatment was clearly evident in the concluding remarks of the Deputies from the Committee of Ministers in December 2021. The Committee found it deeply concerning that, despite the long-standing nature of the issue, it was still not possible to discern an overall strategy envisaged by the Hungarian authorities “to ensure that ill-treatment by law-enforcement agents is eradicated and ill-treatment complaints are effectively investigated.”

The Hungarian Helsinki Committee warned of the wider ramifications of Hungary’s failure to implement judgments of the Strasbourg and Luxembourg courts, when states “start to tear up the fabric of international agreements by not complying with the judgments of international courts: Non-compliance with court judgments is not only a sign of and, at the same time, a factor contributing to the deterioration of the rule of law, but also leads to human rights violations that are left without remedy and that are possibly even recurring.”