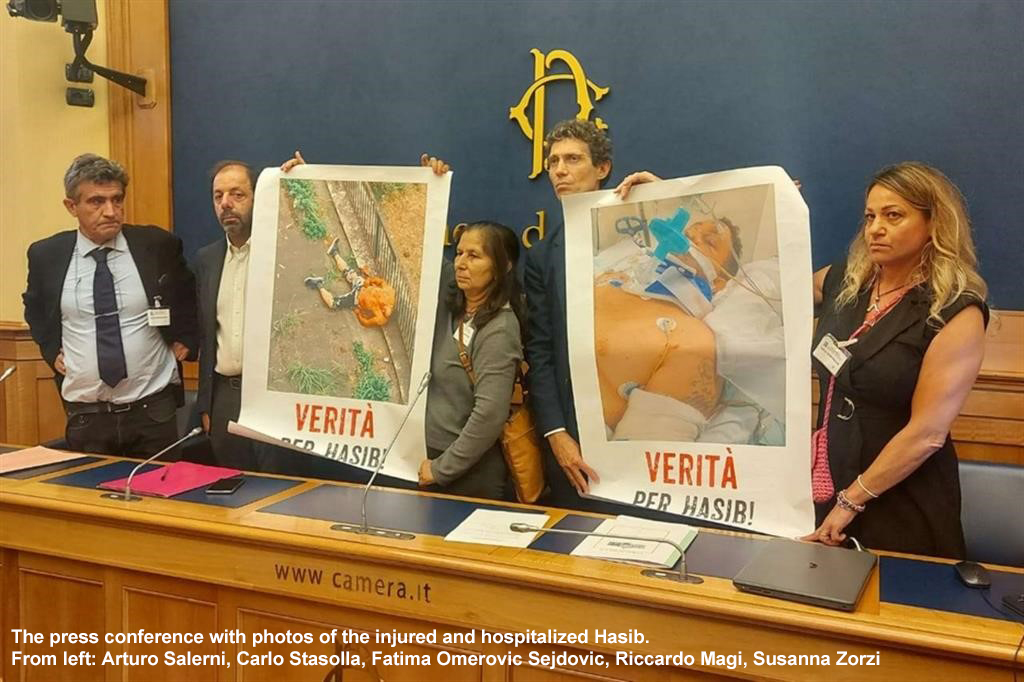 Hasib Omerovic, a 36-year-old Rom, who has been deaf since birth, remains in an alert coma since 25 July, due to injuries sustained when he ‘fell’ nine metres from his bedroom window during an unauthorised police raid on his apartment.

In a press conference in Rome on Monday 12 September, Hasib's mother, Fatima Sejdovic, flanked by Deputy Riccardo Magi from the +Europa party, spokesperson Carlo Stasolla from Associazione 21 luglio, and the lawyers representing the family, expressed her incredulity at what occurred and demanded truth and justice: “I cannot forget how I found my son in the hospital, I will never be able to. So, I want to go all the way."

The shocking sequence of events

According to family’s reconstruction of events, Hasib on July 25, who is deaf but autonomous and independent, was alone at home, watching over his disabled sister, while his family were out. At about 1.30 pm, the mother received a call from a neighbour urging her to come home immediately as Hasib had an accident. A police officer intervened on the call and said: "He broke his arm, he's at Gemelli."

After the hospital, the family went to the Primavalle police station, but could get no official information about why uniformed and plain clothes officers raided their home. As Avvenire reported, a couple of officers - informally in the lobby of the police station - explained that they went to the apartment to check Hasib’s documents, and claimed that he locked himself in his room and threw himself out of the window.

This is completely at odds with Hasib’s sister’s account of what happened: "I opened the door and a woman and men dressed normally entered, the woman closed the door of the hall, asked for Hasib's documents, took the photos, they beat him with the stick, Hasib fell and started punching and kicking him... he ran into his room and shut himself up ... they broke the door ... they punched and kicked him, took him off his feet and threw him down."

A neighbour who heard the thud, took the photo of Hasib bloodied on the pavement. She does not want to be identified but she testified that she saw two police officers standing near Hasib, who lost consciousness after dragging himself for a few metres.

When the family returned, they found their home in disarray, Hasib's documents were scattered on a table, the door to his room smashed, a broom handle broken in two, a radiator pipe had been wrenched from the wall, window shutters forced open, and they found traces of Hasib’s blood on a sweatshirt and his bedsheets.

The day before the police raid, a local bar owner warned one of Hasib’s sisters of a social media post accusing Hasib of harassing girls in the neighbourhood. On the Primavalle Facebook page, beside a photo of Hasib, the text read: "Be careful of this kind of being, because it bothers girls, measures must be taken."  A day later, during a police visit to his home, Hasib – who has a completely clean record and had never been questioned by police before this fateful encounter – ended up in a coma.

Il Manifesto asked the following: Why did the police come into the house instead of stopping at the door to check the documents? Did they have a search warrant? Why did the policemen take pictures of the two young disabled people? Why was the door to Hasib's room broken down? What need or urgency was there to detain Habib who hadn't even left the house that day? What was found in the house that could justify such behaviour? Why was there no officer present who could communicate with Hasib in sign language?

According to Deputy Ricardo Magi, "It is not clear why the police entered the house and asked Hasib for documents, or why he was photographed. The family members are not aware of any reports against him or of specific investigation activities carried out by the judicial police, neither upon their arrival on the spot, nor subsequently.”

At the press conference, Associazione 21 luglio and Deputy Riccardo Magi condemned the incident and filed a written question to the Ministry of the Interior, Luciana Lamorgese asking if she is aware of the affair; if there is a service report on the intervention; and if the minister intends to launch an internal investigation as a matter of urgency. As Il Manifesto put it: “these are questions that require answers, now, immediately. Before the electoral wind finally takes away the rights of Hasib and his family.”’

The first reaction was shock and disbelief that such a thing could happen, according Carlo Stasolla from Associazione 21 luglio, who also noted that many witnesses are now too fearful to testify in public and “a veil of silence seems to have fallen in the Primavalle district”. Carlo also requested that the municipality of Rome quickly assign another house to the family "who had to abandon Primavalle after the drama.”

The prosecutor has opened a file against persons unknown for attempted manslaughter, and after the press conference, the Department of Public Security stated that the chief of police, Lamberto Giannini, will "personally follow the investigations being carried out by the Rome police headquarters, to shed light on what happened with the utmost transparency, guaranteeing constant collaboration” to the prosecutor.

Hasib's mother desperately wants to know the full truth of what happened inside her home in Primavalle on the morning of 25 July. You can support the campaign by Associazione 21 luglio for truth and justice for Hasib by signing the petition.