No Education, No Future for Romani Youth Offenders in North Macedonia 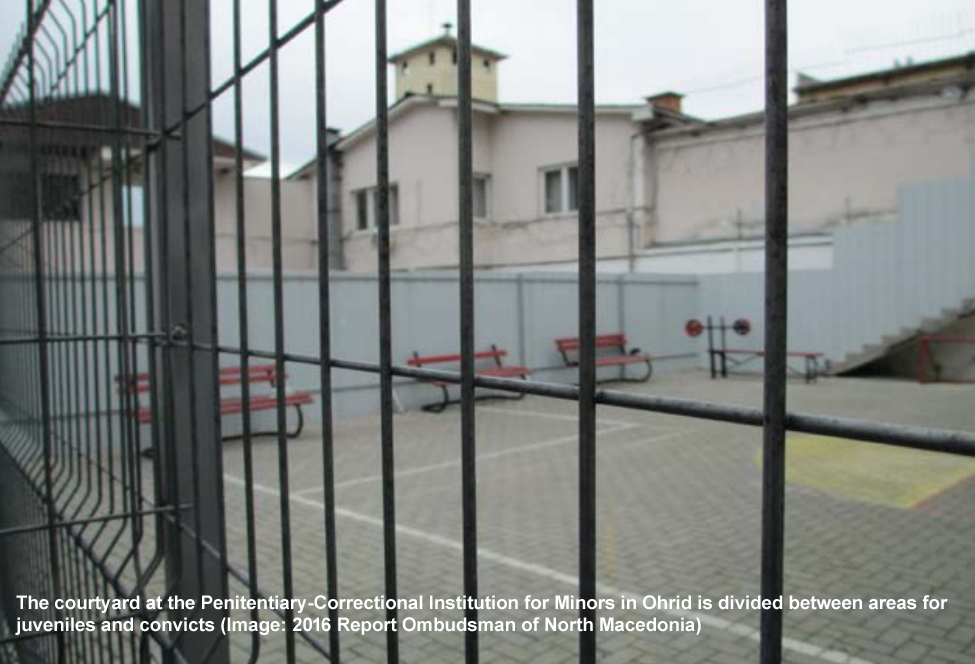 In August 2014, a 15-year-old Romani boy named Ramiz was sent to a juvenile correction institution.

He had been convicted of Aggravated Theft by the Criminal Court in Skopje. From there he had been taken to Ohrid, a city in the west of the country, where he was incarcerated in the Penitentiary-Correctional Institution for Minors.

When he arrived there he found that the majority of the other children there were also Roma. The institution had a room which acted both as a classroom and a recreational room, although he doesn't remember it being used very much for teaching. In fact, other than some basic classes on numeracy and Macedonian language offered by NGO workers, Ramiz's education ended the day he set foot in that institution.

He remained there for three years until he turned 18 and was discharged in November 2017. When Ramiz and the other children left the institution, none of them had any school certificates. Not one of them had any evidence of primary or secondary education, which they would need to show to an employer in future. Not only had they been denied their right to an education, but their childhood sentences had effectively been extended to punish them into their adult lives as a result of this basic right being violated.

Ramiz's experience is representative of many Roma who are convicted of crimes as minors in North Macedonia. The overrepresentation of Romani children in correctional institutions means that they are disproportionately affected by the lack of formal education. It means that these Roma, who usually come from marginalised communities and were already facing a life of everyday racism, exclusion, and discrimination, now begin their adult lives at an even greater disadvantage. In general only 26% of marginalised Roma aged 18-24 are employed in North Macedonia, compared to 67% of non-Roma. The odds were already stacked against these children; but without an education, what chance do they have of getting a job when they get out? 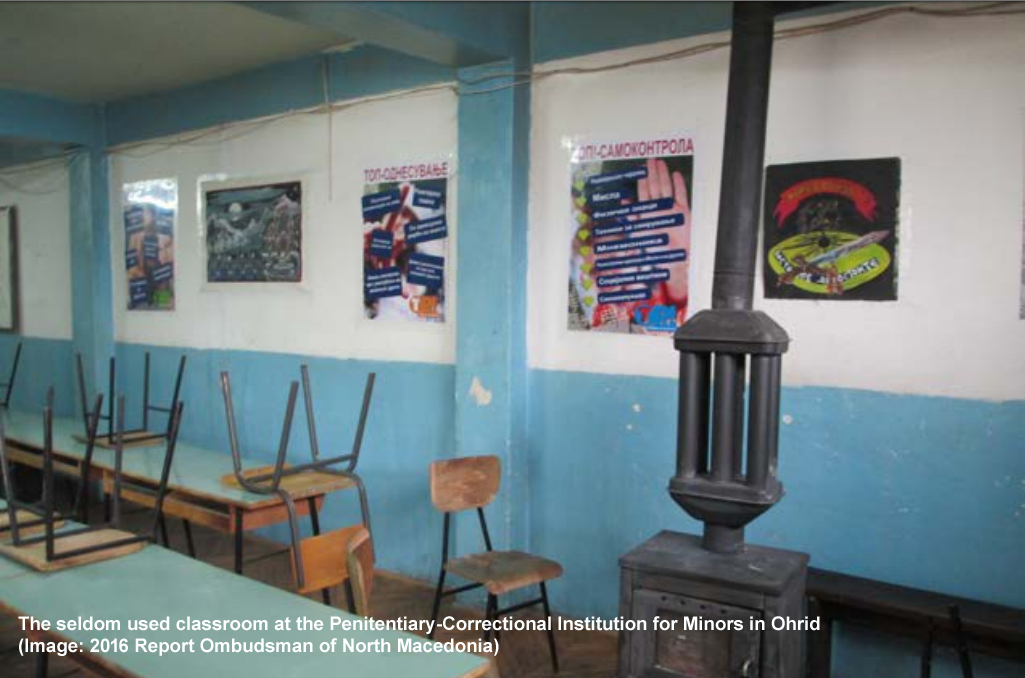 Building a case against the authorities

In 2017, the European Roma Rights Centre decided to challenge this injustice. We began to build a legal case against the Ministry for Justice and the Ministry of Education for indirect discrimination against Romani minors in correctional facilities. We took the case in our own name, but we still needed a Romani person to stand up as a litigant and challenge the authorities for violating their rights. We needed to get inside one of these institutions. Once inside we could speak to the young people there, and possibly get a power of attorney form signed for one of them so we could take a case against the government.

An opportunity presented itself in October 2017, when ERRC lawyers managed to gain access to the Penitentiary-Correctional Institution for Minors in Ohrid. The lawyers approached the institution under the guise of providing educational materials for the young people there. By a stroke of luck the authorities allowed them inside.

"I went there bringing pens and notebooks with me, expecting that the children will at least know how to write their names. I was shocked to find 12 young Roma boys locked in the basement of a dark and dusty institution who did not even know how to read and sign a document" explained ERRC Lawyer Senada Sali.

Once our lawyers were inside, they had the opportunity to speak with the children unsupervised. This is where they met Ramiz, who was by this time 18 and more than ready to take a case against the authorities for the three years of formal education he and his peers had been denied. Our lawyers took down the phone number of his father, so they could arrange to meet when Ramiz left the institution and get the power of attorney forms signed.

"The boys were so happy to see me and hear me talking to them in Romanes" said Senada. "They shared with me what it was like in their days, months, and years in the institution. About the fact that they were not allowed to have family visits, that they had a lot of free time but nothing to do, that they wanted to study, work and one day have a family. I saw lot of wasted potential in each and every of them, and could not explain to myself what benefit there was of them being locked up in there."

The case was successfully lodged on 18th May 2018 at the Civil Court against the Macedonian Ministry for Justice - Directorate for Execution of Sanctions, the Ministry of Education and Science, and the Penitentiary-Correctional Institution for Minors – Ohrid. 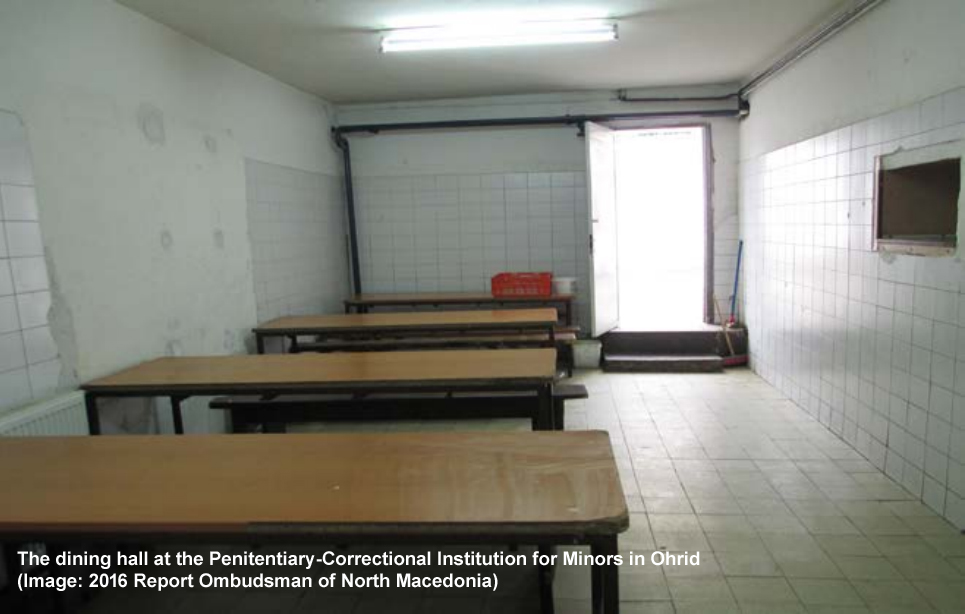 The authorities argued that some informal education, such as basic numeracy and language classes, was offered to the children. However two inspections of the facility by the Ombudsman found no evidence of any activity related to the education of the children, casting doubt on whether any kind of educational syllabus was ever delivered at the institution at all. Even if basic education was provided, children in such institutions do not follow a formal education syllabus which would entitle them to a certificate of education like every other Macedonian. Instead it was found that those who had only partially completed primary education before entering the institution received no further educational activity at all during their time there. Some Romani children entered the institution illiterate, and they will probably leave the place the same.

The testimony of Ramiz, who during the entire duration of his institutionalization did not receive any certificate of completing primary or secondary education, was crucial. We argued that Ramiz, and other Romani children like him, were disproportionately affected by the human rights violation of denying them an education. In the correctional institution in Ohrid, 61% of the children were Roma and none of them had access to formal education, meaning they were indirectly discriminated against on the basis of their ethnicity and directly on the basis of their status as youth offenders.

Unfortunately the Civil Court saw things differently. The Court ruled against us on 16th September 2019. They judged that Ramiz and the other Romani children were not discriminated against in their lack of access to education as none of the children in the institution (no matter their ethnicity) had access to formal education, demonstrating an unfamiliarity with the concept of indirect discrimination. The Court of Appeal confirmed this ruling on the 11th May 2020. The arguments used in the judgment indicate an unwillingness to deal with the issue at local level, with the judge likely preferring that this case was settled by an international court.

While the case was proceeding, the North Macedonian Parliament adopted a new Anti-Discrimination law (which they have recently abolished). The ERRC used this opportunity to file a new complaint before the same court for the same issue, but this time on behalf of all the children affected. This case is still pending before the Court.

Onward and upwards to Strasbourg

It is clear that if North Macedonia will not own up to their responsibilities then they must be made to by a higher body. The next step in Ramiz’s case will likely be before the European Court of Human Rights, before him and the other children can receive justice.

It is here that we hope to prove that the criminal offences of these minors, and the fact of their incarceration, should not deny them their right to an education. The fact that North Macedonia incarcerates a disproportionate number of Romani kids means that these children are more likely to be denied an education because of their ethnicity. The responsibility for this lies squarely with government ministries responsible for justice and education. Until they see this we will continue to litigate by any means necessary to make sure these children, who have already paid for their mistakes, get the best possible chance to start their lives again when they finish their sentences.

*The name of the litigant was changed to Ramiz in this article protect his identity.