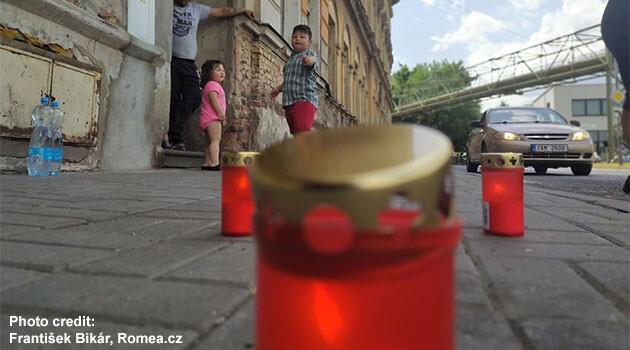 By Bernard Rorke
As hundreds gathered to lay flowers and light candles in the Czech town of Teplice at the spot where a young Romani man, Stanislav Tomáš, died while being restrained by police, outrage has continued to mount since video of the incident went viral across social media.

The shocking footage, recorded from a nearby building, shows three officers restraining Tomáš, one holds his feet, another kneels on his neck for several minutes, while the third handcuffs him. The man can be heard screaming as he writhes on the ground before going limp and silent under the police officer’s knee.

The official responses: denial and obfuscation

On Wednesday, Czech Prime Minister Andrej Babiš thanked the police officers for their work – “they didn’t have it easy”, commenting that aggressive people cannot expect to be handled with kid gloves. Babiš stated that a court autopsy demonstrated that Tomáš did not die due to the police intervention, and crassly commented, “This is sad, but a normal, respectable person would have a hard time getting into such a situation."

As reported in Romea.cz, the official police statement claims that when officers approached the man he became aggressive, they were forced to restrain him and called an ambulance. It then claims that the man was transferred into the care of emergency medical responders and subsequently collapsed in the ambulance, where attempts to resuscitate him did not succeed, “a doctor recorded the preliminary cause of death as a drug overdose and a court autopsy has been ordered to clarify the exact cause of death.”

The police rejected the notion that their actions in restraining Tomáš had anything to do with his death, and were quick to tweet that this incident is no “Czech George Floyd”. The Interior Minister, Jan Hamáček immediately weighed in to give his full support to the police, “Anybody under the influence of addictive substances who breaks the law has to count on the police intervening. It is mainly thanks to the work of policemen and policewomen that we are among the top 10 safest countries in the world."

A police spokesman stated that according to the preliminary autopsy report, the man was suspected of having ingested a foreign substance such as amphetamines, and during the autopsy, pathological changes in the coronary arteries of the heart were found."

As Czech ‘security experts’ line up to defend kneeling on necks as an acceptable practice, it is worth recalling the testimony of Richard Zimmerman during the trial of Officer Chauvin for the murder of George Floyd. Zimmerman stated, “Once you secure or handcuff a person, you need to get them out of the prone position … If they are left on chest or stomachs for too long, their breathing can be compromised”, which increases the danger of positional asphyxia. In summary, Zimmerman told the court: ‘if your knee is on someone’s neck – that could kill them’.

This death of Stanislav Tomáš recalls a similar incident where a Romani man Miroslav Demeter was beaten by customers in a pizzeria and died after a police intervention in October 2016. In this case, video showed a police officer kneeling on the 27-year-old man, and one customer punching Demeter as he lay immobilized on the ground.

Paramedics were unable to resuscitate him when they arrived on the scene. In an uncanny parallel with events in Teplice, the case was closed with the official assertion that the cause of death was unrelated to the beating he took or the police actions to restrain him, but was caused by drug use:

"...the deceased, Miroslav Demeter, did not die because his organs were damaged by a third-party attack, but because of significant physiological degenerative changes to Mr Demeter's internal organs, primarily his heart, that were caused by long-term use of methamphetamine...”

In an open letter to the Prime Minister and Interior Minister, the ERRC has called for a prompt, transparent and independent inquiry into the Teplice incident, that conforms to international human rights standards, one that investigates possible racial motivation, and focuses on the necessity and proportionality of the intervention.

Police violence, structural racism, and access to justice for Roma in Europe

Right across Europe, week in and week out, ERRC gets reports of police misconduct concerning Roma: testimonies of collusion between law enforcement and far-right paramilitaries; ethnic profiling, harassment and over-policing in one district, and under-policing by deliberate failures “to serve and protect” in another; mass raids on Romani neighbourhoods; and serious injuries even deaths resulting from beatings in custody or during arrest. The emergency lock-downs due to Covid-19 witnessed an upsurge in incidents of police brutality against Roma in Europe.

The EU’s new anti-racist action plan and Roma inclusion framework both stressed the need for policing that is not prejudiced against racialized minorities, but did not go beyond recommendations that Member States “step up efforts to prevent discriminatory attitudes among law enforcement authorities” and held forth the prospect of more anti-bias training for police officers. This won’t make a difference, and won’t do anything to dismantle structural racism in the criminal justice systems.

The EU and its Member States must take steps to ensure that ‘Roma lives matter’ and law enforcement agencies across Europe must be held accountable. National governments must provide adequate resources to set up independent bodies to investigate alleged cases of racist misconduct by police. Police must be made aware that racism will not be tolerated and will be punished, that cases will be thoroughly investigated and punishment will be proportionate and serve as an effective deterrent. Victims of racially motivated policing should be provided with free legal aid and protected from intimidation in their pursuit of justice.

The tragic death of Stanislav Tomáš should be a wake-up call for European and national authorities that they need to get serious about policing and access to justice for Roma. However, the obfuscation, official denials and disparagement of the victim by the Prime Minister, as somebody who was not ‘normal or respectable’, suggest that Europe’s reckoning with racial justice is a long way off.

In an era when racism has been politically mainstreamed in illiberal member states of the EU, broad based mobilization is needed so that whoever deploys racism to wield power and subjugate others must be held to account by all means necessary that are consistent with non-violent struggle.