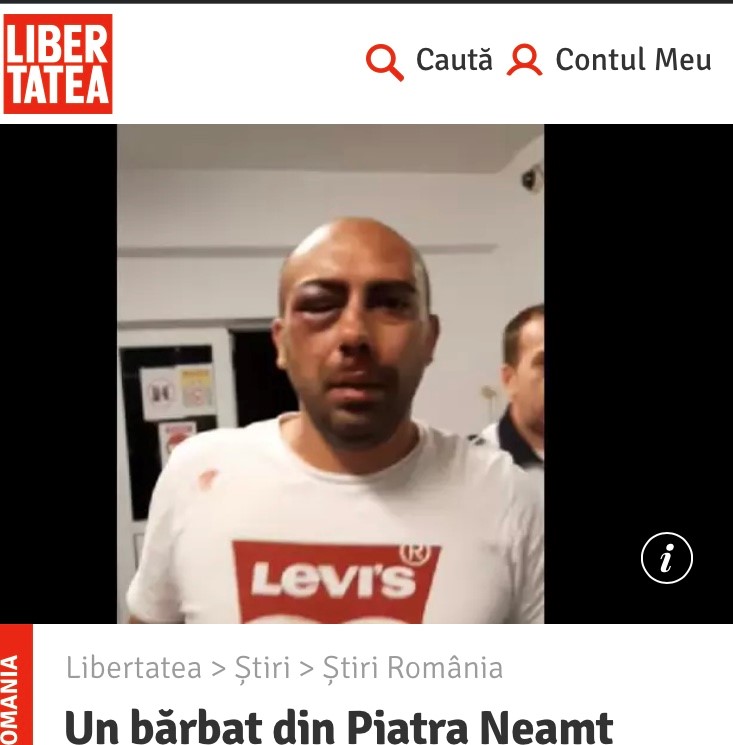 As reported by Libertatea, on 19 June, a 37-year-old Romani man from Piatra Neamț alleged he was beaten by police officers. A video clip shared on social media by Roma rights activist, Ciprian Necula, shows the man leaving the police station, unsteady on his feet, his shirt bloodied, and with a badly bruised and swollen eye, being met by his visibly distressed and crying children. The man later called the emergency 112 number and said he had been assaulted by police. Another video shows him being taken away in an ambulance.

According to the police, on Saturday, 18 June at around 20:30, the man, while riding in a taxi, insulted police and a gendarme. The police halted the cab, and when the passenger allegedly refused to identify himself, “he was immobilised and taken to the Piatra Neamț Police Headquarters, in order to establish his identity and take the necessary legal measures"; and duly fined 2,000 lei (€404). In response to inquiries from Libertatea, the Neamţ County Police Inspectorate (IPJ Neamț) stated the prosecutor has opened a case and that an internal investigation will take place to establish “the factual situation”.

The statement does not inspire much by way of confidence that justice will be served. ERRC’s recent report Brutal and Bigoted: Policing Roma in the EU, found that 20 years of ‘grave concerns’ and recommendations by international bodies, as well as numerous judgements  from the European Court of Human Rights (ECtHR) have had no tangible impact on curtailing police brutality and racism against Roma in Romania.

In his end-of-mission statement on Romania, UN Special Rapporteur Philip Alston expressed deep concern about allegations of police abuse against Roma, and observed a worst-case combination of persistent credible allegations, a lack of the most basic procedures to deter abuse, and a broken and ineffectual complaints system (that yields a successful prosecution rate of 0.13% of all complaints):

“There is nothing peculiar about police violence, which is a universal problem. What is peculiar about the Romanian situation is that the rules that currently apply could be seen as a charter for harassment. The system includes characteristics that make abuse easy and ensure that accountability will be the rare exception rather than the norm.”

In its 2019 Report on Romania, ECRI also drew attention to the fact that Roma were frequently subjected to disproportionate force by law enforcement, and that since 2015, “the European Court of Human Rights (ECtHR) delivered over 20 judgments condemning Romania for cases of police violence and the failure of the authorities to effectively investigate inhuman and degrading treatment by police, including racially motivated ill-treatment.” In its considered opinion, ECRI ventured that “these repeated cases indicate a persistent problem in the country”. The ERRC will closely follow developments in this particular case.