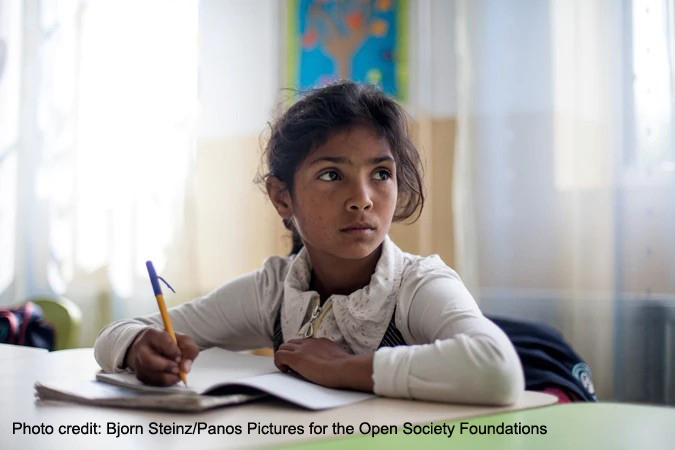 A bill initiated by Cătălin-Zamfir Manea, a member of the Roma Party, will explicitly ban school segregation in Romania. The bill which will soon go before Parliament, has apparently secured all-party support, and will prohibit segregation of children in schools based on race, ethnicity, religion, socio-economic status or disability, with fines for offenders ranging up to 100,000 lei (€20,231).

As reported in Fanatik.ro, while the bill aims to combat multiple forms of discrimination, it will explicitly target the segregation of Romani students in Romanian schools. According to the explanatory memorandum of the draft law:

"The prohibition of segregation by law brings benefits not only to Romanian citizens of Roma ethnicity, but to the entire Romanian and European society, one of the major benefits being the fact that the school transmits the main moral values, good coexistence, promoting interethnic dialogue and, more chosen to apply the principle of equity in the education system.”

Costel Bercus, Chair of the Centre for Education and Human Rights, described MP Manea’s initiative as courageous, and the draft legislation as thorough, well-conceived and a necessary framework to move forward on school desegregation. He welcomed the prospect of 100,000 lei fines for those who persist in segregating school children as proportionate, and stiff enough to act as a deterrent for others. He stressed that this bill would complement and reinforce existing mechanisms to provide Romani pupils with equal access to quality integrated education in Romania; and suggested that it could “create a precedent for other countries in the region to follow.”

The most recent report presented to the Romanian Parliament by the Association Center for Advocacy and Human Rights (CADO) found that 285 schools out of 805 in 11 monitored counties register at least one form of segregation. Intersectional discrimination is a recurring feature, according to Cerasela Bănică, former president of CADO, and new member of the National Council for Combating Discrimination: “47% of schools have at least two forms of segregation on different criteria: ethnic combined with socio-economic, ethnic combined with school performance, ethnic combined with disability, etc.” Increased resort to online education also revealed a digital divide, and according to Bănică, those children who did not have internet access, found themselves victim to a new form of segregation.

A very short history of school desegregation in Romania

As Margareta Matache and Simona Barbu recalled back in 2003, the Network of Local Human Rights Monitors established by Romani CRISS, identified the case of ethnic separation in Cehei School in Salaj county, and CRISS lodged a complaint which was upheld by the Equality Body. Romani CRISS vs. Salaj School Inspectorate and Cehei School would become the landmark documented segregation case in Romania, and led  to the Ministry of Education issuing a Notification that forbade the separation of children on ethnic grounds but proved ineffectual.

CRISS continued with advocacy, monitoring, litigation and consultation, which in 2007 led to the adoption of a Ministerial Order, banning the segregation of Roma children in schools and approving measures to prevent and eliminate the practice. The Ministry also passed complementary orders, promoting cultural diversity in the national school curricula, and establishing school mediation. One year later, a report by Romani CRISS found that the ‘Desegregation Order’ was not applied in 63% of the 134 schools sampled across ten counties in Romania. Further, the report found that teachers and principals in many schools were completely unaware of the ministerial order.

In 2011, Romani CRISS with other NGOs convinced Parliament to amend the new Education Law, including several articles that forbade misdiagnosis and the practice of placing Roma children in ‘special’ (segregated) schools, based on their race, ethnicity, or other criteria.

But neither these measures, nor the EU Roma Framework did much to ameliorate the situation. Segregation persisted, and the ERRC concluded in 2016, that in Romania, “Romani pupils in segregated classes or schools have significantly worse learning conditions than their peers in mixed facilities: buildings are often in a state of disrepair and more often lack heating and access to electricity and sanitation than mixed schools. Their teachers more often lack the qualifications required by law and suffer from poor morale. These conditions lead to a significantly higher dropout rate and poorer educational attainment.”

In 2018, the Roma Civil Monitor noted that despite the anti-segregation provisions in the 2016 Education Act NGOs signalled that “the practice of kindergarten and primary school principals promoting and forming segregated classes and groups continues and has gone unpunished”, and that the impact of government actions on desegregation was ‘minimal’.

ECRI, in its 2019 Report on Romania, “noted with great concern the persistent and high incidence of anti-Gypsyism, resulting in Roma constantly enduring hatred and insults in public life. Roma people are often portrayed as ‘thieves, liars, lazy’ and systematically linked with criminality, which reinforces bias and increases their social exclusion.”

As for material deprivation,  FRA found that 68 % of Roma were living without tap water in their dwelling and 79% of Roma were living in households without a toilet, shower, or bathroom inside the dwelling. As FRA noted, “Roma in Romania – the country with the highest number of Roma in the EU – enjoy access to safe water in rates similar to those in Bhutan, Ghana, or Nepal.” Forced evictions remain a “particularly pressing problem”, often carried out in an abusive fashion, resulting either in homelessness or relocation to remote sites without infrastructure or access to essential services, thus reinforcing residential segregation. This is the wider context that routinises racial segregation in schools.

For UN Special Rapporteur Professor Philip Alston, one of the most striking features he noted in his end of mission report on Romania was the official state of denial when it came to racism and discrimination against Roma. If the Romanian Parliament passes the bill initiated by Romani lawmaker Cătălin-Zamfir Manea to explicitly ban and penalize school segregation, it will at least signify a degree of political will to move beyond the denial of racism – a belated but necessary first step.