Romania: What kind of justice? Romani woman publicly beaten by minibus driver gets fined for disturbing the peace 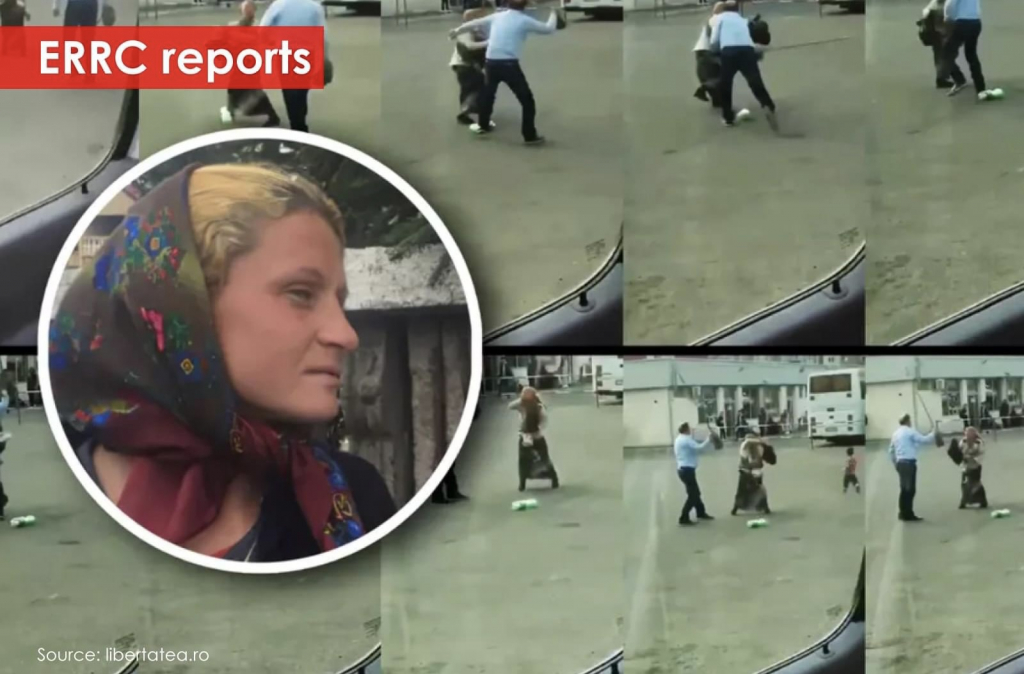 In 2019, 25-year-old Romani mother Florica Moldovan attempted to board a minibus with two of her children. The driver, former policeman Marius Filip, refused to let her on the bus. When she protested, Filip jumped off the bus and proceeded to beat the mother with a mop in front of all the passengers. Video of the shocking and brutal assault of the woman with one child in her arms, went viral and sparked public outrage.

The ex-policeman received a suspended sentence; the Romani victim was found guilty of disturbing the peace and public order and was sentenced to pay a fine of 1,800 lei, and failure to pay the fine will result in a sentence of 180 days in prison. In addition, the young woman was forced to pay 800 lei in court costs. The twisted verdict of the court just compounds the scandal and serves as a damning indictment of a criminal justice system that is racist to its core.

As Simona Voicu for Libertatea reported, the mother of five had taken two of her children for treatment to the hospital in Zalău on Easter Thursday 2019, where the doctor gave her a prescription and sent them home. She had no money to pay for the prescription, but a pharmacist, taking pity on the children, paid for the pills and syrups. Then with one child in her arms and another by her side, she headed for the bus station to take a minibus home. Then followed the racist assault by the bus driver, which left the woman needing three to four days of medical care.

The driver pleaded guilty, but Florica Moldovan maintained her innocence and said that she was a victim not only of assault but also of ethnic discrimination, claiming that although there were free seats on the bus, the driver refused her entry because of her ethnicity. Witnesses testified that there were vacant seats on the bus, and many expressed the opinion that the driver’s actions were motivated by the fact of the woman’s Romani ethnicity.

Despite video evidence and passenger testimony, the judges gave credence to the driver, and dismissed witness assumptions that his actions were motivated by ethnic bias as ‘mere speculation’. When Florica described the racist abuse she received from the operator when she dialled the emergency 112 number, the court stated that "this circumstance is not the subject of the case under trial".

The judges described Florica’s reaction to being denied entry to the minibus as “exaggerated”, and that the language she used caused “fear and indignation”. In a classic example of victim-blaming, the judges ruled that Florica was the one who generated the conflict “thus creating the premise of the unfortunate event” and that her frustration at being barred from boarding “cannot justify its explosive manifestation.” The case was submitted to the Cluj-Napoca Court of Appeals, where appeals will be heard in the fall.

This appalling judgement is yet another example of how systemic antigypsyism skews outcomes for Romani victims of racially-motivated violence and denies them justice. The European Court of Human Rights recently reminded the Romanian state that:

“Racial violence is a particular affront to human dignity and, in view of its perilous consequences, requires from the authorities special vigilance and a vigorous reaction… The Court further reiterates that when investigating violent incidents, State authorities have an additional duty to take all reasonable steps to unmask any racist motives and to establish whether or not ethnic hatred or prejudice may have played a role in the events. Treating racially-induced violence and brutality on an equal footing with cases that have no racist overtones would be turning a blind eye to the specific nature of acts that are particularly destructive of fundamental rights.”