The Fight Against Antigypsyism - A Lesson for the Prosecutor's Office 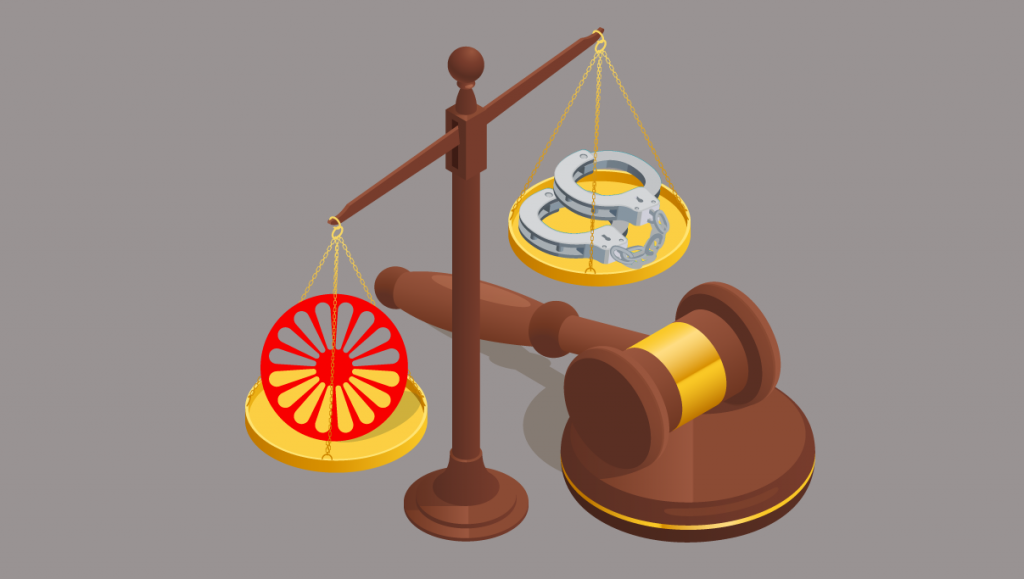 The final chapter of a story worthy of the silver screen was played out before the High Court in Belgrade recently (at least in the first instance). In it the main characters, due to their ethnicity, went from being ordinary citizens seeking police protection to victims of police brutality.

One April morning in 2017, Marko and Sandra, a married couple from a village near Mladenovac, noticed that their car had disappeared from their yards. Sandra immediately reported the theft to the police, and zealous police officers soon carried out an investigation. The inspector pointed out to Sandra that, as a foreign citizen, she needed to stop by the police station at some point and report that she was staying at her husband's address. Soon after they went to the station to report her residency, where the inspector told them great news - the car was located. They just needed to go to Belgrade to provide some more information and identify the car. Encouraged and satisfied with how efficiently the police had reacted, Marko and Sandra left for Belgrade in an official vehicle.

This is where things began to take a turn for the worse. Not long after they had left, the conversation started to seem strange. The inspector asked them questions about their company in Vienna, and whether it is possible to make a living from theft there. As soon as they arrived at the "29. November" police station they, without any explanation, underwent a polygraph examination. An officer told them that they had failed, that they were lying, and that colleagues would further deal with them. Two inspectors from Mladenovac then took them to separate room for further interrogation.

Marko was in a room with eight officials in civilian clothes. He was slapped several times, punched on his body, verbally abused, forced to kneel for extended periods, whipped on his palms, and was forced to admit that he organized the theft of the car. They pulled a plastic bag over his head and held it until he started choking and fighting for air. One of the policemen put a gun to his palm and threatened to leave him with a "memory for a lifetime". The same officer threatened to "put on electricity" to torture Marko with. The inspector from Mladenovac threatened to call the centre for social work in order to take Marko and Sandra's daughters into state care as they would now end up in custody.

Although Sandra was being interrogated in another office, she could hear sounds coming from the other room. When she asked what the heavy thudding noises were, she was told there were painters working next door. Neither Sandra nor Marko were allowed to inform their family about where they were or call a lawyer. After almost 13 hours spent under police control, they were finally released home. 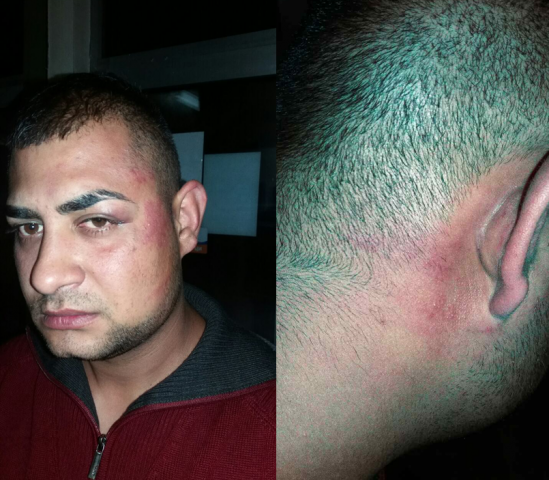 Contusions to Marko's face and head sustained while in police custody.

The final decision was given by the High Court in Belgrade, in civil proceedings, and according to the lawsuit that Sandra and Marko, with the support of the European Roma Rights Centre, filed in 2017 against the Republic of Serbia (i.e. the Ministry of Internal Affairs). Based on the evidence presented in the procedure; above all the medical documentation on the injuries, expert findings, and statements of witnesses and prosecutors, the High Court in Belgrade found that the Ministry was responsible for the damage caused to Marko and the fear caused to both of them. The court also found that the Ministry had discriminated against Marko and Sandra on the basis of ethnicity.

Due to the position of the prosecution, criminal proceedings were never conducted. Marko and Sandra filed a criminal complaint with the competent prosecutor's office in May 2017, through their lawyers. The report was filed against several officials for abuse and unlawful deprivation of liberty. A year and a half later, and after two instances, the prosecution dismissed the criminal complaint. Driven not to give up the fight for their rights, Marko and Sandra filed a complaint with the Constitutional Court in October 2018, pointing out the violation of several human rights and freedoms, primarily the prohibition of torture and the right to liberty and security. Before the Constitutional Court they pointed out, among other things, that the work of the prosecution did not meet the legal standard of an effective investigation.

Although the High Court in Belgrade did not decide on criminal responsibility, it did assess whether the police had violated the Law on Police. In this regard the court found that the officials, by physical using and mental coercion without due reason, exceeded their authority. The verdict clearly stated that the described actions "should not and should not have been taken in the way it was done in the specific case". It was clear to the court that the plaintiffs suffered due to the actions of the police.

So, what is the significance of this court decision? Such a verdict is further confirmation of what the human rights protection bodies have been pointing out; that there is a systemic problem in the attitude of the police and prosecutors towards cases of torture. Inadequate conduct of the police is not the work of a few officers who have "strayed," but an accepted practice in police culture, especially among criminal inspectors. This was stated in the report of the European Committee for the Prevention of Torture and Inhuman or Degrading Treatment from 2018. The report lists some of the methods used by the police to extort confessions, or just to punish. These include slapping, punching, kicking, baton, non-standard items (such as a baseball bat), and electric shocks. It was pointed out that, in order to oppose the culture of impunity that exists in certain parts of the police, it is crucial to conduct effective investigations into allegations of inadequate treatment and to punish the crimes of police officers.

However, what really sets this case apart from other similar cases of police brutality is the part of the judgment relating to discrimination. The High Court in Belgrade determined that the police discriminated against Marko and Sandra. Everyone who deals with legal protection in cases of discrimination knows how underdeveloped and uneven court practice is, how many ways the provisions of the Law on Prohibition of Discrimination are mistakenly interpreted and applied, and how often there is a fundamental misunderstanding of the complex legal and social phenomenon of discrimination. All this enhances the significance of a well-reasoned court judgment. The importance of this decision is that harassment has been identified as a form of discrimination. The High Court found that Marko and Sandra were treated in a degrading manner, with the aim of violating their dignity, and on the basis of their personal characteristics. The court based its conclusion on the following facts: that members of the Ministry took Sandra and Marko away, and kept them on the premises of the Police Administration for the City of Belgrade for no apparent reason; that insinuations were made by officials of them engaging in theft in Vienna; that they insulted Marko with the commonly used ethnic slur "gypsy motherfucker," and that Sandra said that she was called a "gypsy shiptarka" and asked "what is this white woman doing with this black [Romani] man?" The court found that Marko was discriminated against as a member of the Romani ethnic minority. The associative discrimination that the court found in relation to the treatment of Sandra by the police is also significant; she was exposed to harassing and degrading treatment due to the ethnicity of her husband.

This case can also be seen in the broader context of the police's attitude towards discrimination and minority groups. The first surveys on the attitudes of members of the police of the Republic of Serbia towards discrimination were conducted in 2014 and 2015. The research showed that the police have a very low level of understanding of the concept of discrimination and vulnerability of certain social groups. Among members of the police, this is most pronounced towards Roma and members of the LGBTQ+ population. Amongst the police, as many as 26% of respondents approve of breaking the law for the sake of efficiency, while 41% believe that Roma "like to steal". These attitudes are worrying. With all this in mind, it is clear that the chain of unfortunate events and harassment that Marko and Sandra went through started from two premises; the attitudes of the members of the police towards the Roma, and the approval of breaking the law for the sake of efficiency.

The number and frequency of similar cases of police brutality against Roma is unknown as there are no records, but this is certainly not an isolated case. The European Roma Rights Centre has, in addition to the Marko and Sandra cases, four other cases that have been documented or where legal proceedings have been initiated. Recently, the Basic Public Prosecutor's Office from Mladenovac rejected the criminal report for the same crime committed against a Romani boy. Only during the state of emergency did information about three more cases of alleged excessive use of police force against Roma in Belgrade, Nis, and Pozega reach the public.

This is all institutional antigypsyism. This term best explains the way Roma are treated in institutions; it implies not only the most obvious, cruellest, and most brutal manifestations of anti-Roma sentiment, but also that subtle, difficult to notice, and yet very present discrimination which is manifested through lack of due attention and lack of understanding in the work of state bodies with Roma, and is deeply rooted in stereotypes. Sandra and Marko's case fulfils every element of the “institutional antigypsyism” definition. Physical harassment, insults based on ethnicity, unfounded accusations of theft by the police, as well as the ease with which the Belgrade prosecutor's office rejected Marko and Sandra's statements about the harassment they experienced, the medical documentation they submitted, the witnesses they proposed as well as the whole event qualifying as an "informal conversation" with police inspectors, is really nothing more than institutional antigypsyism in its clearest form.

While this court decision represents at least a preliminary victory and partial satisfaction, the fact that the officials who participated in these illegal actions will go unpunished leaves a bitter taste. The prosecution has put an end to the criminal procedure, and the conduct of disciplinary proceedings against persons reported for breach of duty has become obsolete. Without establishing individual responsibility, the competent authorities make it known that they do not intend to substantially oppose the climate of antigypsyism in their ranks. Without determining individual responsibility, damage is inflicted on all those police officers who conscientiously and legally perform their duty protecting the interests of citizens. Finally, this judgment of the High Court in Belgrade should first serve as a lesson to the prosecutorial authorities as to the level of seriousness and thoroughness the issue of institutional discrimination merits.