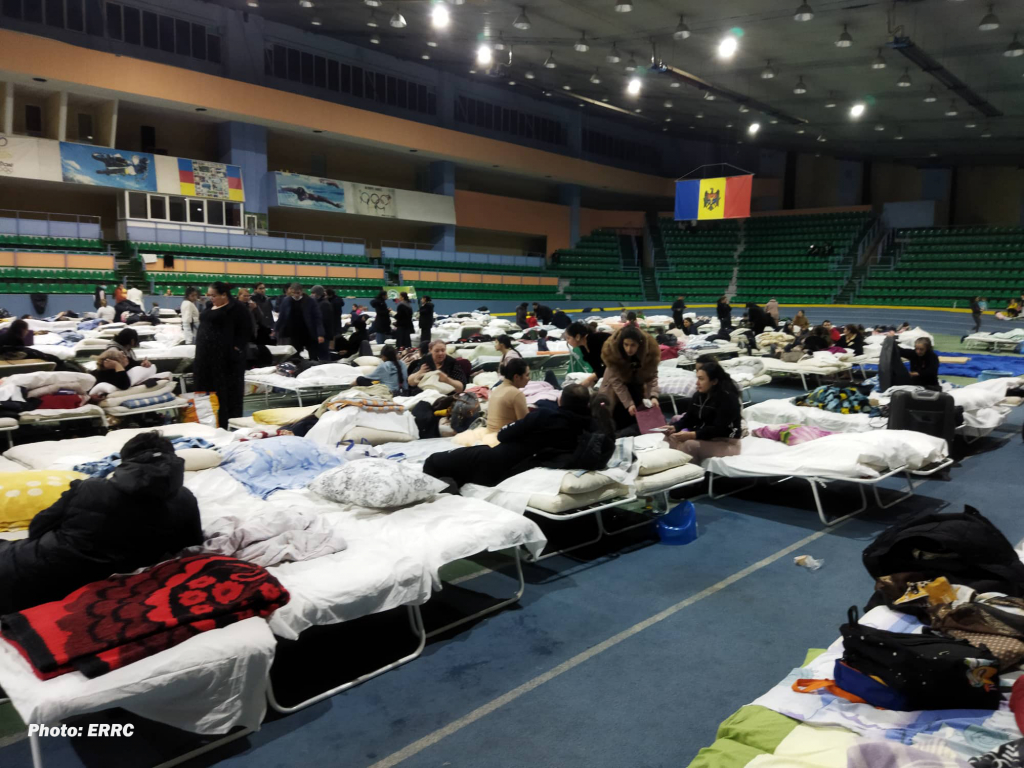 Roma from Ukraine who have availed themselves of Moldova’s open border, which allows them to enter the country even without documentation, are now finding themselves in ethnically segregated reception centres with poor living conditions and not enough food to go around. The European Roma Rights Centre (ERRC) has visited three separate reception centres used almost exclusively to accommodate Romani refugees, as well as a small number of other ethnic minorities. An ERRC human rights monitor estimated that more than 90% of those housed in each centre were of Romani origin, with the remainder being a mix of people of Central Asian and African descent.

In an unused office in the country’s capital, Chisinau, around 70-80 Roma (including many children) were crammed into small spaces, sometimes 15 to a room. There was one toilet on the ground floor and no washing facilities. They said that they received some food on the evening on the first day they arrived but nothing since then. After three days, they were transported by bus to the Romanian border.

Elsewhere in the city, around 175 refugees were being accommodated in what used to be a municipal hospital for tuberculosis, that has more recently been used to treat covid-19 patients. Here the conditions were better; there was central heating and some food available. The vast majority of people were Roma there, alongside a few Azerbaijanis and Uzbeks. Local authorities plan to evacuate the hospital as soon as possible in order to send these people to the Romanian border.

The largest number of Romani refugees are currently being accommodated in the Manej Sports Arena, an indoor running track in Chisinau. The ERRC estimates that there are currently around 600 refugees living there in a large hall, the vast majority of whom are Romani. Buses to take them to the Romanian border come regularly, but another large group of Romani refugees are expected to replace them soon. There are inadequate resources here to cater to such a large number of people, with Roma complaining there is not enough food, warm clothing, or medicine for children who are falling ill. 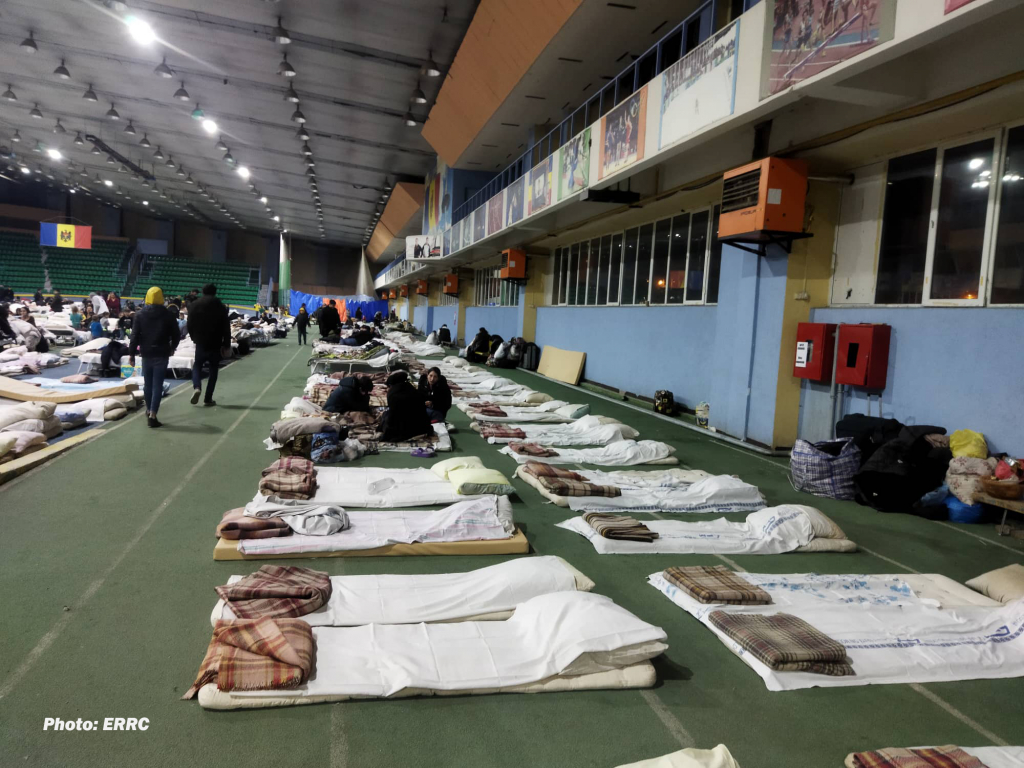 In each reception centre visited by ERRC human rights monitors, the absence of white faces was conspicuous. Moldova’s apparent policy of bringing busloads of ethnic minorities from the Ukrainian border, housing them in ethnically segregated centres (often in poor conditions), and then bussing them to the next border as soon as possible appears to be discriminatory. In addition, Roma are often sent to the border without being informed about of how the immigration process works, and many are turned away for not having the right documentation. Children who are accompanied by adult family members who are not their parents are frequently denied entry, and their family members even faced with accusations of trafficking. Others simply have no passport, or in some cases no identification at all, and are stuck in the limbo of the segregated reception centre, unable to reach their friends and family in the EU and unable to go back to their homes in Ukraine.

It is likely that the number of Romani refugees coming to Moldova from Ukraine without documents will continue to rise. The ERRC has confirmed through human rights monitors in Ukraine that people who are without any identification documents at all are being denied exit from the country at border crossings in the south-western region of Zakarpattiya. The region is home to one of the largest Romani populations in the country, many of whom are at risk of statelessness through lack of identification documents.

For a number of years the ERRC have been working to directly provide documents, or train Romani paralegals to obtain identification documents, for Romani communities in the Zakarpattiya and Odessa regions. A 2018 report from the ERRC, the European Network on Statelessness, and the Institute on Statelessness & Inclusion warned of the risk of statelessness amongst the Romani populations of Ukraine, largely driven by discrimination in local authorities and marginalisation of affected communities.

The ERRC understands that Ukrainians without passports or any other forms of identification are not permitted to cross the Ukrainian border control towards bordering EU countries (although the criteria for documents has been relaxed significantly, with even a signed letter from an NGO apparently being permitted as ID). For those Roma who have absolutely no form of identification whatsoever, Moldova’s open border makes it the only viable option.

All of the states bordering Ukraine are bound by the UN’s 1951 Refugee Convention and 1954 Statelessness Convention which provide obligations on refugee receiving states to provide documentation in lieu of passports. This right is further provided for in Article 14 of the Universal Declaration of Human Rights, as well as Article 18 of the European Union’s Charter of Fundamental Rights. Border authorities do not have the right to turn away those claiming asylum, Roma or non-Roma, purely on the basis that they are not in possession of identification documents. The right to asylum assumes that in times of war, refugees will be unlikely to go to their passport office and get a travel document. With all of the registries closed in Ukraine, as well as the Ukrainian Embassy in Chisinau, these Romani refugees have no method of obtaining valid documentation.

The European Union’s decision on 4th March to activate its Temporary Protection Mechanism is intended to grant everyone fleeing the conflict entry to the EU. This mechanism allows border guards to relax checks, even if there is an absence of travel documents, and encourages Member States to issue an arrival declaration and/or provisional travel document for people without documentation (in line with UN treaty obligations). For the moment, it seems that this relaxation is not being applied when it comes to stateless Romani refugees at the border with Moldova.

You can keep up to date with news on the situation of Roma in the war in Ukraine, as well as see where you can donate to help Roma and non-Roma refugees here.