Violent anti-Roma racism in Italy: a tipping point or the toxic ‘new normal’? 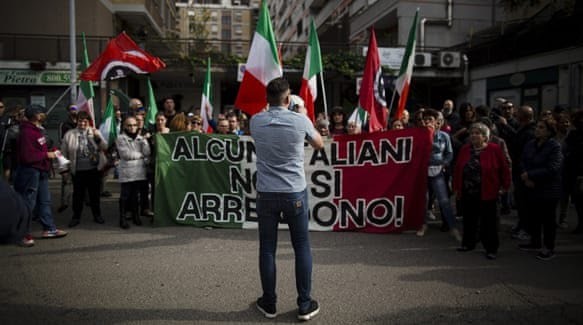 Lately friends and acquaintances, hitherto either disinterested in, or oblivious of Roma issues press me for information and updates and ask how things are going for Roma.  The answer should be obvious, and I ask them “Have you not seen the latest news reports?” Yes, they reply, unbelievable…

Well then, I tell myself, finally people are beginning to realise what goes on. Recent events have drawn attention to the situation of the Roma in Italy, or at least revealed the sheer hatred they must endure in our country. Some suggest that ‘we’ are exaggerating. That, okay, even if something has happened to these Roma, or nomadi  – or whatever they are called, we can never be sure – these recent events in Rome are totally exceptional, way out of the ordinary.

Even if these nomadi were really so deviant and sly, so far removed from ‘us’, with supposedly no desire to go to work or school; even if ‘we’ don't know where they come from – never mind that half of them are Italian citizens – even if we did know, it seems that there are many, millions of them – never mind that in reality they are only about 180,000 Roma in all of Italy – even if we heard somewhere that they actually like to live in camps; in short, whatever Roma are supposedly ‘guilty’ of, ‘we’ think what’s been happening to them in recent weeks is absolutely out of order. Why (they ask) is so much anger vented on those families? What fault could possibly lie with them? Why so much hate?

People press me too for insights. "It's not normal," a friend of mine declared recently "What’s not normal?" I asked. “The hatred that ‘we’ pour on these people.”

The recent events in Rome have been so chilling that a part of public opinion has had to question itself, come to terms with its own prejudices and ignorance about a minority that has been present in Italy for centuries. The first episode was in Torre Maura in early April, when about 70 Roma, including 33 minors and 22 women (three of whom were pregnant), were about to be transferred to a new shelter. Protests by some locals erupted, supported by extreme right movements such as Forza Nuova and Casapound. "They must starve" the citizens screamed, trampling sandwiches and snacks intended for the families into the ground – better ruined and wasted than used to feed Romani women and kids.

A few days later, the two deputy premiers announced, on two different TV programs, that the Roma camps must be closed. Without any explanation as to why, exactly when, or above all how this is to be done. They must just be closed and that’s it. They have just to be closed, that’s it. On April 8th, International Roma Day, in the Casal Bruciato district, a Romani family that had been on the waiting list for some time finally got allocated social housing; but the home was occupied by a young Italian couple with a six-month-old girl. Some citizens took to the street to demonstrate against the Roma and in support of the occupants. Again Casapound was present as the mob roared, "We don't want the gypsies here, this house must go to an Italian."

In Naples on April 14, four teenagers set upon a group of two Romani women and seven minors as they left a cinema. The teenagers screamed abuse and insults, threw stones and threatened to stab the petrified group of women and children who fled to a nearby bar for safety.

At the end of April, the mayor of Vicenza, Francesco Rucco, extended an ordinance prohibiting the parking and halting of vehicles of about fifteen "nomad" families until the end of September. These families have children who attend school, and this ordinance creates serious difficulties and obstructs the children’s right to education.

On May 5, Rome witnesses another protest against a Romani family being allocated public housing. The mother says her children were insulted: "shit gypsies go away."

A day later, the protest erupted in the neighborhood of Casal Bruciato after a Romani family of two parents and 12 children from La Barbuta formal camp, was assigned social housing. Again, angry locals are backed up on the streets by Casapound. For their personal safety, the family needed a police escort to enter and exit the building. The children were very frightened and some of them were taken to relatives. The next day, the mother, returning to the house with her two-year-old daughter in her arms, is roughly jostled by the screaming crowd and threatened with rape. We have reached the tipping point. A part of Italy recoils in the face of such violence, such vile malice and rage, when a mob can turn on a mother with her baby in her arms – a mother who has waited her rightful turn on the housing list, trying to enter her new home, finds her way blocked by a mob of Italian citizens and threatened with rape just because she is Roma.

Another part of Italy passively accepts all this, is either resigned or even tacitly supports such acts. But one section of Italian society says ‘not in my name’, is shocked and horrified, and demonstrates in solidarity with the Roma victims. Others simply express their dismay and upset at what is happening. The news programs and TV shows talk about it, interview the Roma, and try to understand how they feel to be the target of such hatred. But, what is lacking is the institutional response to all this violence. While the mayor of Rome has finally stood up to defend the right to housing and the rule of law, national institutions and authorities have remained silent or stutter about the need to amend the criteria for social housing so that it is ‘Italians first’.

This situation dismays Roma and angers many Italian who are indignant at the failure of the responsible institutions to guarantee and defend the rights of all without distinction, and without manipulation for electoral gain.

Meanwhile, far from the glare and publicity around these recent manifestations of racist malice, there are thousands of Roma who remain oppressed, impoverished and have suffered in total silence for years. Some 400 Roma of Bosnian origin, most of them children, have lived in the municipality of Giugliano for about 30 years. Evicted in 2011, they were forced to wander from one eviction to the next until 2013, when the municipality placed them in a so-called regular camp, in the locality of Masseria del Pozzo. This camp is nothing more than a toxic dump among the landfills in the Terra dei Fuochi (Land of Fires). The conditions are so debasing that on my first visit to the camp, I could scarcely believe that this was a regular camp. Families live in wrecked caravans and children play in a field smothered in toxic fumes and industrial waste. There are pools of water all around, and when it rains, the residents explained to me, the whole camp becomes inaccessible.

In 2018, the Campania region allocated €1.3 million for the construction of an eco-village. But even here the protests kick off and everything stops. The Roma were just left to themselves, without knowing what to expect. That is until April 5, when the mayor issued an eviction order in the wake of a report from the local healthcare agency that drew attention to the dangerous hygienic conditions. The Roma and some NGOs tried to reason with the municipality, that these people could not be thrown back onto the street. But the mayor remained adamant. On May 10, the camp eviction went ahead. People were ordered to leave, and forced to wander again. And they were evicted three times in that one day. Eventually they stopped on some private land, to wait and wonder what will happen next. Since the May 10 eviction, these Roma have been forced once again into oblivion, their lives rendered even more precarious and uncertain by uncaring authorities, banished beyond the margins of society.

This is the Italy that bears down so cruelly on the Roma – an Italy that permits such things to happen. There is another side of Italy that resists in solidarity, but it must face down enormous difficulties to ensure that its efforts are not overwhelmed.