What do the Bosnian & Herzegovinian Elections Mean for Roma? 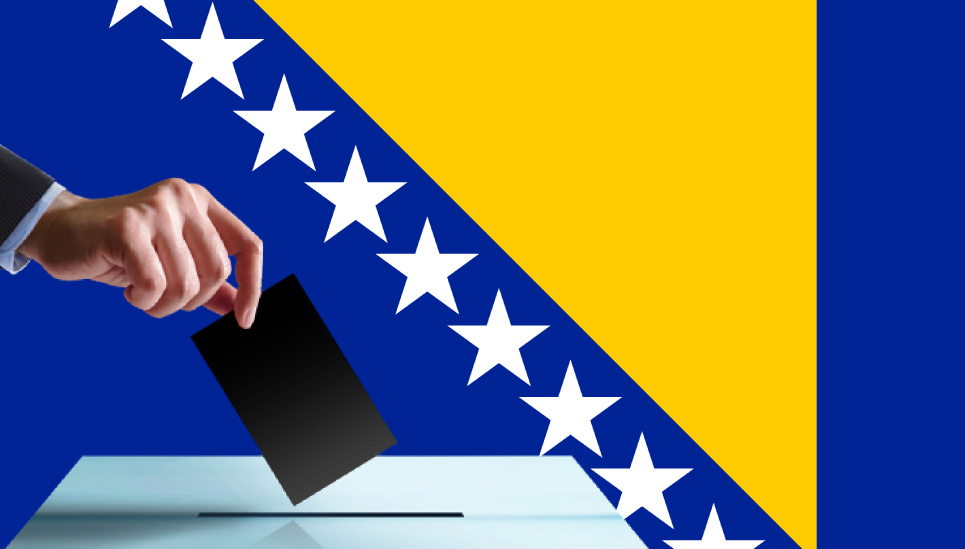 For Roma in Bosnia and Herzegovina, the general elections come as a painful reminder that the Constitution and the Electoral Law which violate their human rights by limiting their political participation have still not been reformed 13 years after the historic Sejdić and Finci vs BIH case, in which the Strasbourg Court found the Constitution violates the European Convention on Human Rights.

The results of this year’s general elections were mixed. On the one hand, there was an anticipated change at the Federation level with the opposition coalition gathered around SDP’s Denis Bećirović, who won over SDA’s Bakir Izetbegović. On the other hand, continuing allegations of “voter fraud” at the level of the Republika Srpska entity muddied proceedings. The topic of Roma participation was largely pushed aside from public discourse. Given the tumultuous political atmosphere in Bosnia and Herzegovina, now lasting over a quarter of a century, what (if anything) can Roma expect from the recent elections? And if the general elections won’t help, which mechanisms do offer the opportunity for equality and justice to Bosnia and Herzegovina’s largest minority?

To find out how Roma feel about the recent elections, I spoke to prominent Romani activists Indira Bajramović, director of the Association of Roma Women 'Better Future' ('Bolja budućnost'); Asmir Husić, Roma activist - Association of Young Roma AKSIOM; and Dalibor Tanić, editor of Roma news portal Newipe. They all agreed that the elections hold no meaning and will result in little tangible change for Romani people, for a number of related and ingrained reasons.

Roma are prevented from being elected

Part of the issue for Romani people is the environment in which the elections took place; Dalibor says that “In the days prior to the elections, the atmosphere resembled the war environment”. In this context, any effort to address human rights violations is depicted as malevolent attempts to destabilise the Dayton Agreement which could lead to a repetition of the 1990s bloodshed. This mindset has caused the topic of Roma participation (as voters and, in particular, candidates) to be pushed aside from public discourse by the prevailing ethnonationalism that shaped the election debates.

The Dayton Agreement aimed to bring an end to one of the most devastating conflicts on European soil since WWII, and to ensure the safety and security of all citizens of Bosnia and Herzegovina. Yet the Agreement safeguarded a Constitution and Electoral Law by which some citizens, namely the “constituent peoples” (which include Bosniaks, Croats, and Serbs), are to be elected to the three-partite Presidency and the House of Peoples in the Parliamentary Assembly of Bosnia and Herzegovina, while the so-called “others” (which includes citizens of other ethnicities, such as Romani or Jewish people) were denied their fundamental right to be elected. The Constitution stands in stark contrast to the European Convention on Human Rights.

The Agreement, and the lack of interest in implementing reforms since, have both legally codified and normalised violations of Roma rights, and this has spilled over into everyday life. The informal yet widely present “ethnic key” means more importance is placed on ensuring equally represented constituent peoples in public institutions and public enterprises than meritocracy and racial justice. This inevitably prevents the mobility of Roma and hinders their access to decision-making spaces. Alternatively, Roma can deny their Romani identity and declare themselves as belonging to one of the three constituent peoples – Bosniaks, Croats or Serbs - to secure opportunities and equality which should be available to all. 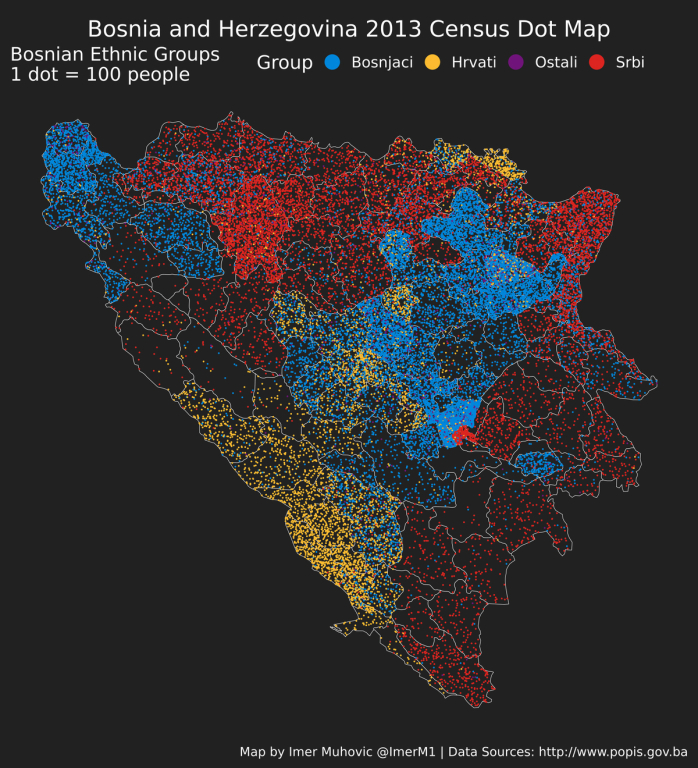 Geographical spread of ethnic groups in Bosnia, including the three represented groups in parliamentary politics, which excludes Roma.

Lack of engagement with Romani communities by leading politicians

In a pre-election survey conducted by AKSIOM, 74.4% of the Romani people surveyed noted that their neighbourhood was not visited by the running candidates during the election campaign. 95.3% of Roma stated that they do not believe that any politician or political party in Bosnia and Herzegovina has so far stood up for the interests of Romani people. The activists interviewed emphasised that Roma are only the voting target group prior to the local elections, during which politicians often visit the impoverished Romani neighbourhoods with grand promises to improve infrastructure, or sometimes with offers to buy their votes.

Roma are usually only mentioned in the party manifestos as vulnerable and requiring further resources mainly in the fields of education, employment, housing, and health. Such manifestos usually offer a couple of paragraphs on Roma, which mainly serve to signal the running party’s inclusiveness to the EU and other international human rights monitors in Bosnia and Herzegovina.

The inevitable result is political apathy among Roma, especially among Romani youth. Asmir and Indira agree that these different factors contribute to political apathy which, compounded by economic deprivation, leads young Roma to focus on day-to-day survival rather than fruitlessly seeking to challenge a corrupt political system built upon human rights violations.

The elections did result in a change on the Federation level, which Dalibor puts down to most Romani voters and citizens voting for SDP because they were “simply fed up” with the previous regime. SDP’s Denis Bećirović has in the past maintained good relations with Roma representatives, and often underlines in his speeches the need to ensure equality of all citizens. Unfortunately, the program of SDP offers few prospects on how that could actually be achieved for Roma with no concrete steps outlined for fighting antigypsyism and racial injustice. When it comes to the Republika Srpska entity, where some are still discussing the alleged electoral fraud, Roma rights are not just a secondary topic but are perceived as a threat and a burden in an already entangled political context.

The interviewed activists also emphasised that most Romani leaders simply do not communicate with Romani people. Many of them have positioned themselves as the legitimate voice of the community despite barely engaging with it. As a result, Roma rarely vote for Roma, even on the local level. This creates a lack of new Roma faces in politics which is compounded by the unwillingness of the governing structures to include Romani people as advisors and policymakers.

So, if not via elections and through representatives, how do Roma in Bosnia and Herzegovina secure their rights? The activists agreed that NGOs and international organisations play a part, but mostly they rely on themselves and their families, neighbours, and the wider Romani community. 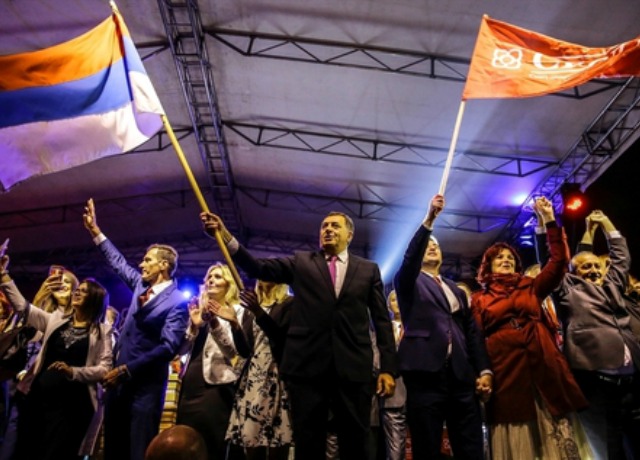 What are the prospects of escaping this perpetual limbo?

The political debate in Bosnia and Herzegovina often focuses on a widespread premise that the rights of others, including Roma, can be achieved only at the expense of the constituent peoples. This turns inalienable human rights into a scarcity not accessible to all. Roma then are a hostage of the decades-long securitisation, which claims that granting them all-encompassing citizen’s rights would undermine the safety, security, and stability of the country. While constituent peoples may ask “What can we expect from the elections?”, Roma and “others” keep asking “Can we expect anything?” given that we are de facto and de jure not equal members of the society.

Before the elections took place, 88.9% of Roma believed that they would not bring any changes to the Romani community. Yet in the same survey 85.4% of Romani respondents stated that they still intended to vote. Romani people carry out their citizens’ duty even though their citizens’ rights have been shattered. It is up to the newly elected representatives to recognize that Romani voices have been neglected, and to include them as a valuable vehicle for bringing about change that can make Bosnia and Herzegovina a country of all citizens, equally.