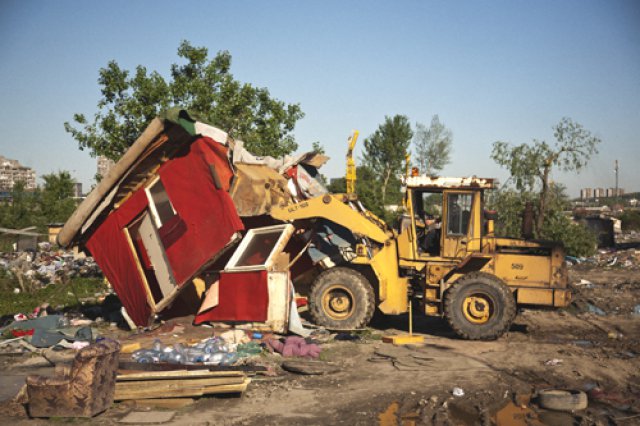 Brussels, 29 June 2020: After a five-year-long legal battle, two Roma who were evicted from their homes in Belgrade and placed in an abandoned warehouse in Nis have finally been awarded more than €2,600 each (plus interest) in compensation by the Belgrade Court of Appeal. The European Roma Rights Centre (ERRC) represented them and another third litigant, who has unfortunately died in the years awaiting the court’s decision.

Despite awarding damages, the court rejected the ERRC’s argument that forced evictions disproportionately target Roma in Serbia and constitute indirect discrimination. They also failed to address the vulnerable position of Roma living in segregated settings, which requires special attention from the authorities, or the fact that the Romani families were living without any papers to regulate their habitation in their place of living and were therefore at risk of further evictions.

“While awarded damages can partially compensate for the violation that litigants have suffered, domestic courts continued to ignore the wider context and devastating circumstances in which many Roma in Serbia live today” said Andrea Colak, the lawyer working on the case on behalf of the ERRC. “The judges failed to instruct authorities on their legal obligations to take measures which prevent violations and remedy injustices Roma face. Ignoring these obligations amplifies the spiral of antigypsyism and institutional racism.”

The litigants, their families, and around 1000 other Roma were forcefully evicted on 26th April 2012 from an informal site in Belgrade which was known as “Belville”. Many of the people living there were internally displaced families from Kosovo who were relocated to shipping containers on the outskirts of the city. Some of the Romani families represented by the ERRC had registered permanent addresses in Nis, so the authorities sent them to live there in an abandoned warehouse without access to water, sanitation, or electricity.

The ERRC filed a complaint in April 2015 against the Republic of Serbia, the City of Belgrade, and the City of Nis for violating these people’s right to housing and right to be free from discrimination. The recent decision by the Belgrade Court of Appeal partially reverses the first instance judgment of the Civil Court. This judgment states that the litigants’ rights to housing and discrimination (based on place of residence) were violated because they were put in a less favourable position compared to other evicted Roma who were eligible to stay in Belgrade and benefit from different kinds of support.

The court relied on the jurisprudence of the European Court of Human Rights and the International Covenant on Economic, Social and Cultural Rights as reasoning for its judgment and awarding compensation, which is rare for a domestic court. Whilst the damages won by these Roma is a positive, the rejection of ethnic discrimination and the long wait for a judgment (during which time one of the litigants died) demonstrates that the barriers to accessing justice remain stark for Roma in Serbia.