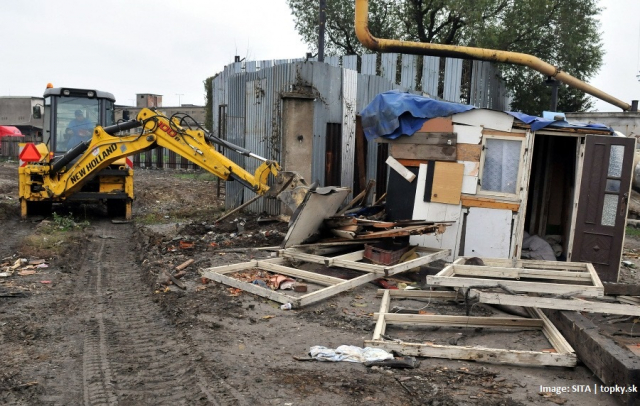 Bratislava, Brussels, 24 January 2022: The District Court Košice II has ruled in favour of 9 members of a Romani community, who were forcibly evicted from their homes in the district of Nižné Kapustníky, Košice in 2012 under the pretext of waste removal by the city authorities. The inhabitants were offered no alternative accommodation after their homes were demolished, and as a result, they became homeless. Some of them were bussed to different part of the country. The Court has ruled, in its first instance judgment, that the City of Košice violated human dignity and the right to privacy of the plaintiffs and committed illegal discrimination on the basis of their ethnic affiliation.. Counsel Martin Mendel and Associate Richard Marcinčin from Dentons law firm represented the displaced families on a pro bono basis, working in co-operation with the European Roma Rights Centre (ERRC) which acted as a third-party in the proceedings.

On 30th October, 2012, the City of Košice forcibly evicted 156 people, including 63 children, from their homes in Nižné Kapustníky, where they had been living in informal housing for close to a decade. The eviction was carried out without a court order or decision from an administrative authority, and the affected people were not given prior written notice. The municipal police enforced the eviction, ordering the residents to leave the area and rendering them homeless. Their homes were demolished by excavators and the displaced Romani people were sent by bus to other parts of the country where they were supposedly registered. Representatives of the city of Košice described the Nižné Kapustníky eviction merely as the disposal of an illegal landfill where “inadaptable people” had built their dwellings. In 2013, the Public Defender of Rights found there had been a violation of the rights of those who were evicted by the Košice municipality.

“Although this is only the first instance decision, it is a great victory for those evicted people who have been fighting a legal battle for more than 7 years so far. The judgment is also important for the future as it sends a message to authorities everywhere who seek to illegally evict Roma from their homes and creates new case-law on forced evictions and the Anti-discrimination Act. I believe this is the first judgment with a finding of harassment in Slovakia under this law” said Michal Zálešák, the ERRC’s Legal Consultant and attorney working on the case.

Associate Richard Marcinčin from Dentons commented: “I am pleased and grateful that I was given the opportunity to help the affected inhabitants of the Nižné Kapustniky area.  It is a very important, and most probably unique, decision in Slovakia, which may help to prevent authorities from making such arbitrary  actions without any legal grounds towards people in similar situations. We expect that the City of Košice will appeal against this decision, but we are ready to continue defending the rights of our clients  until we see a fair end to this case.”

The plaintiffs were awarded a total of €9000 in compensation. The authorities have 30 days after the judgment becomes valid to implement the court’s decision. It is expected that the City of Košice will appeal the case.