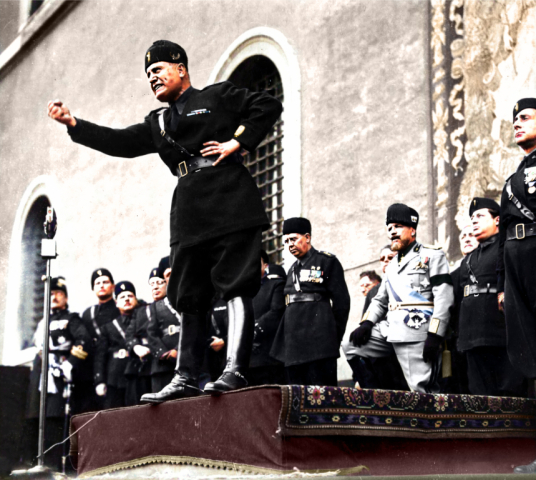 A hundred years ago today, the fascist leader Benito Mussolini marched on Rome with his Black-shirts paramilitary. With widespread support, and a group of no more than 30,000 fascists, he took control of Italy in a coup d'état that was praised at the time for its lack of violence. Within four years of Mussolini seizing power, all “foreign Gypsies” were ordered to be expelled from the country. His regime would later oversee the internment of Roma and Sinti in Italian concentration camps where thousands were either murdered, deported to Nazi death camps, or died of hunger and the poor conditions.

A century later and Italy has not come to terms with its fascist past. A far-right government once again rules from Rome, led by a party who are in many ways the successor of Mussolini’s movement. Last month a founding member of the now in-power Fratelli d’Italia party, Ignazio La Russa, said on national television “we are all heirs of Il Duce.” Two weeks ago, the 75-year-old (who in his spare time enjoys collecting fascist memorabilia) was elected Speaker of the Italian Senate. Then last night, on the eve of the centenary of Mussolini's march on Rome, members of the far-right Movimento Nazionale hung a banner on a bridge in front of the Colosseum which read “100 years later, the march continues” next to a picture of the fascist dictator. 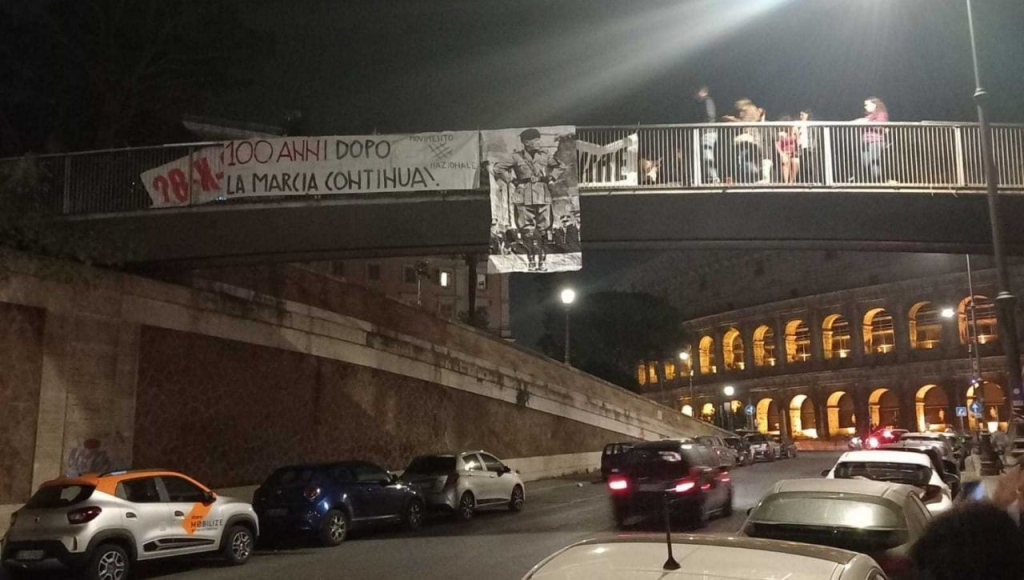 Mussolini’s anti-Roma roundups and internments were intended to “strike at the very heart of the Gypsy organism”, but to this day the racial character of the Romani Holocaust is not acknowledged in Italy and there is no commemoration day for the Roma and Sinti victims of the regime. Like other countries, this has meant ‘the Gypsy question’ has remained a political football; an othered group to be used by politicians who seek to scapegoat an often-reviled minority for cheap political gain. Until quite recently it was Matteo Salvini’s Lega party who held the baton for antigypsyism in Italy (and his return to government in the new coalition will ensure it remains a part of their values). However, it is Prime Minister Giorgia Meloni's Fratelli d’Italia who can be seen as the true continuation of Mussolini's legacy.

In terms of their rhetoric (Italy for Italians, loyalty to the nation, sanctity of the family), symbolism (the tri-colour flame inherited from the fascist Movimento Sociale Italiano), and motto (the use of Mussolini's “God, country, family” slogan) the party has all the trappings of a fascist political movement. In terms of policy however, it seems more likely that the new far-right coalition will lean more heavily on the domestic policy traditions of Silvio Berlusconi’s Forza Italia.

Giorgia Meloni owes a lot to Berlusconi, having cut her political teeth in his fourth cabinet as Minister of Youth. Recent rebukes aside, she has publicly defended him during his many scandals, and owes her current position to the union between his party and hers, along with Matteo Salvini’s Lega. Her position on Roma has never strayed to Salvini levels of overt hate speech, but it is completely informed by the nativist views of her party, combined with the raft of policies derived from her time in Berlusconi’s cabinet. 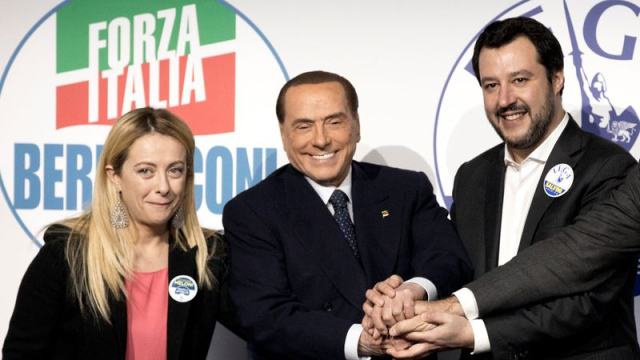 During Silvio Berlusconi’s third term as Prime Minister of Italy, he oversaw a national state of emergency which declared Roma as a security threat to the nation. In what came to be known as the ‘nomad emergency,’ law enforcement and local authorities began monitoring and harassing Romani communities. They held ethnic censuses, carried out ID checks, and photographed and fingerprinted adults and children. While the police harassed and profiled Roma, the state began aggressively evicting them from their living places. At the same time the government started increasing the number of so-called “nomad camps”; ethnically segregated government camps, which were later neglected and left to deteriorate by local authorities.

The ‘nomad emergency’ was found illegal by the State Council in 2011, and again by the Court of Cassation in 2013. For many Roma, this mattered little. The policies of the emergency had set a template for widespread state harassment of Roma which has continued for more than a decade to the present day.

The policies of Berlusconi’s ‘nomad emergency’ are the hymn sheet from which Italian local authorities have been reading for almost 15 years. The electoral success of Giorgia Meloni and her far-right coalition is less likely to mean a return of anything like Mussolini’s Racial Laws, but very likely to embolden far-right racists and street movements across the country. For the majority of Italian Roma who have had to deal with the daily iniquities of Berlusconi’s legacy, it is difficult to see how things could get much worse than the current situation. 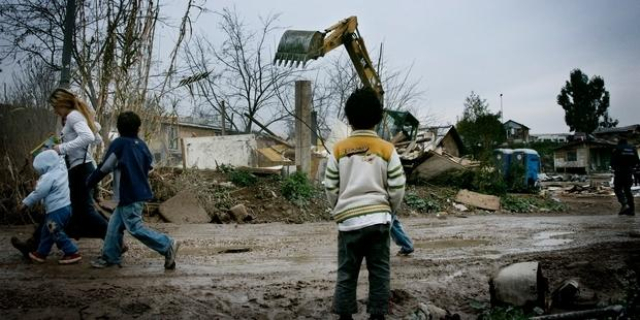 In the days after the Italian election, as the initial results that the Fratelli d’Italia led far-right coalition had won a parliamentary majority were confirmed, 36-year-old Romani man Hasib Omerovic was coming out of a coma. Hasib has hearing and vocal impairments and lives with his family in a social housing block in a suburb of Rome. He had been in a medically induced coma since July 2022 when he inexplicably fell nine metres from the window of his family apartment and onto the street below.

Inexplicably, meaning there is no official link between him ending up face down on the concrete and the four plain clothes police officers entering his home without a warrant only moments before. Inexplicably, meaning the bloodied lash marks on his back observed by a neighbour have no causal relationship with the police officers, or his being ejected from a third-floor window.

In the same week, with Giorgia Meloni’s pledge to govern “for all Italians” still fresh in international news, dozens of police officers carried out a dawn raid on the homes of Romani families in a camp in Sassari, Sardinia. Lines of Carabinieri riot vans, accompanied by municipal and state police cars lined the nearby road. Ten men were arrested and the camp evicted and seized, with women and children put in temporary accommodation. The reason? Some of the men had been illegally disposing of waste without a license.

Both these incidents represent two of the most common forms of state violence towards Romani people in Italy: police raids and forced evictions. Such actions are by no means a modern phenomenon; some of the ERRC’s earliest records are of police brutality and forced evictions in Italy. But they represent two of the most visible heirlooms of the ‘nomad emergency’ which have persevered through countless coalitions of Italian parties.

While it is unlikely that the new far-right government will mean a return to fascism and anti-Roma laws in Italy, Meloni’s premiership is likely to include a dangerous mix of ‘nomad emergency’ policies, combined with the nativist political platform of a party whose origins lie in the fascist movements of the 1940s. In recent years, Fratelli d’Italia have proved themselves hostile to Roma in every locality where they have held power. In coalition with Salvini’s Lega and Berlusconi’s Forza Italia, this government could be the most anti-Roma regime since the end of fascist rule. In truth, the legacy of Mussolini is not only to be found in Fratelli d’Italia. It lives on in each of the three coalition partners through their history of antigypsyism, hate speech, and racist policies.