BLM, racism and resistance: This is not the time for a Euro-whitewash 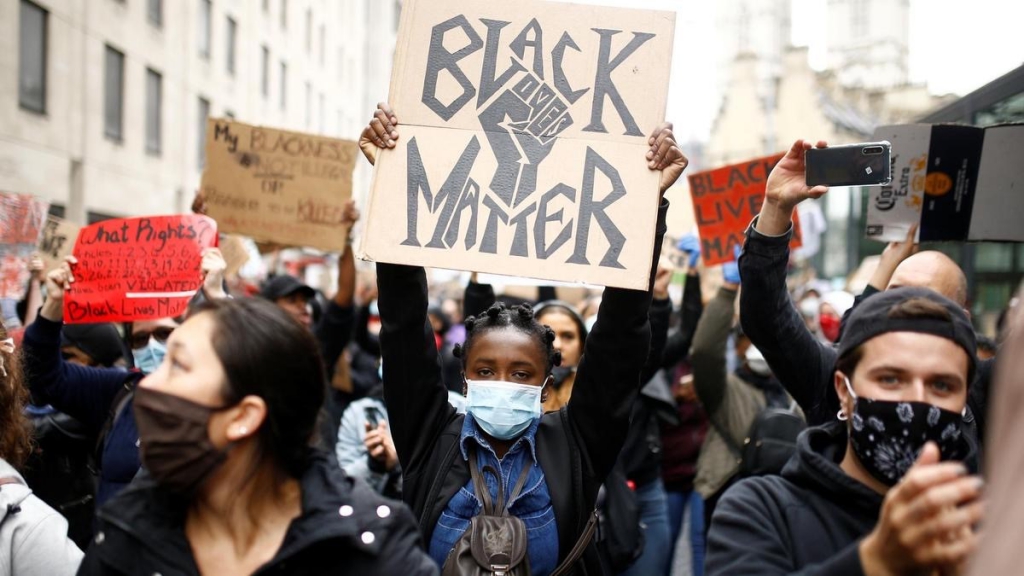 As Cornell West put it, in these fateful days since the murder of George Floyd, “we may be witnessing America as a failed social experiment.” Tens of thousands of people in European cities took to the streets in solidarity with the overwhelmingly peaceful, occasionally riotous, and forever wondrous insurrections across the USA. Black Lives Matter has begotten what might yet prove to be modern America’s most profound reckoning with anti-Black racism. A similar reckoning is long overdue in Europe.

For there can be no room in Europe for hubris, or denial of racism; no room for the smug superiority that allows Europe’s governing white elites to harbour the illusion that racism is ‘better managed’ here than in the USA. Claims to that very effect by EU Commissioner Margaritis Schinas, prompted an open letter of protest from ENAR and 150 other organisations, appalled at his ‘blatant denial’ of the existence of racist policing and structural discrimination against people of colour across Europe.

Flying in the face of evidence from the EU’s own Fundamental Rights Agency, Commission Vice-President Schinas, responsible for "promoting our European Way of Life", claimed that we do not have “issues now in Europe that blatantly pertain to police brutality or issues of race transcending into our systems”. The Commissioner had no doubt that, “Europe as a whole has been doing better than the United States in issues of race, also because we have better systems for social inclusion, protection, universal health care”, adding that because of the “European tradition for protecting minorities, we have less issues than they have in the States".

This maybe comes as news to Romani victims of collective punishment by racist mobs acting at the behest of political leaders such as Bulgarian Deputy Prime Minister Karakachanov – who in 2019 called for a “complete solution to the Gypsy problem” – or Italy’s former interior minister, Matteo Salvini whose calls for a mass cleansing of Roma “street by street, piazza by piazza, neighbourhood by neighbourhood” were taken literally by members of neo-fascist gangs such as CasaPound and Forza Nuova.

Commissioner Schinas’s myopic intervention about that ‘European tradition’ came just days after a 14-year-old Romani boy sustained a fractured eye socket and four broken teeth in the course of being detained by French police. The boy, Gabriel Djordjevic told reporters, “There were four of them. One of them put handcuffs on me and put his knees on my back. A woman [officer] held my feet while a bearded police officer kicked me in the face.”

The murder of George Floyd has also reignited controversy over the 2016 killing in custody of 24-year-old black Frenchman Adama Traoré. The release of an official report clearing the three arresting police officers, added to growing anger about racism and brutality by French police. In response, a Macron spokesperson denied France was a racist state and rejected any comparisons with the US.  While no official date or ethnically disaggregated figures are kept on the number of people killed or brutalized by police or gendarmes, Amnesty International has long warned of “a pattern of de facto impunity” with regard to law enforcement officials in France.

In contrast to recent EU denunciations of racism in America, the same leaders were silent about the killing in March 2017, of French Traveller Angelo Garand, shot dead by police during a raid on his family home. In a pattern familiar to many black families in America, the state prosecutor asserted, without any supporting evidence, that a lethal response was justified, because Garand posed a danger to the police and resisted arrest.

Less than a month later, near the Bulgarian village of Bohot, police savagely beat and kicked a Romani father and son, who went to collect firewood. The son survived this ferocious assault; his father died at the scene. The authorities justified the police action by claiming that the men were found in possession of stolen pesticides and had resisted arrest. In October 2017, Romanian police shot dead a Roma man who was collecting firewood in a forest in Mureş County. According to an official statement, police and foresters were in pursuit of persons “identified as being of Roma ethnicity” who were stealing wood from the forest: “In attempting to apprehend them, police officers had to use their weapons. Under these circumstances a person was injured who subsequently died.”

These lethal incidents, which occurred within the space of a few months in 2017 and generated neither indignation nor even regret from EU political leaders, provide a snapshot of the ‘European tradition’ concerning its minorities, and a reality of which Commission Vice-President Schinas seems completely oblivious.

It goes deeper than police brutality, and as shown by many cases in Slovakia, racism penetrates the very structures and institutions charged with upholding the rule of law. Following a notoriously violent mass police raid in in Moldava nad Bodvou, Roma victims who were badly beaten and injured by police officers, and testified as witnesses, themselves ended up in court charged with perjury. The prosecutor attributed alleged irregularities in their testimonies to their “Roma mentality”, which according to ‘expert’ psychological opinion, was characterised by “low trustworthiness, a propensity to lie and emotional instability”. Having exhausted all domestic remedies, the quest for justice has since migrated from Slovakia to the European Court of Human Rights (ECtHR) in Strasbourg.

In 2018, six years after a Slovak police officer invaded a Romani home and shot dead three family members, a couple who survived the shooting, but were seriously wounded were awarded damages by the ECtHR. Despite having confessed to talking about the need for ‘a radical solution for dealing with’ Roma people, the police officer was not charged with a racially motivated crime.  To add insult, he was given a reduced sentence of nine years’ imprisonment on the grounds of diminished responsibility. Instead of outrage at police violence, in the immediate aftermath of the triple murder came a surge of online support for the gunman, who was hailed as a hero in social media. Such is the state of play when it comes to the oppression of Roma in Europe, and what activists with bitter irony have called, ‘the last acceptable form of racism’.

Homegrown structural racism, institutional discrimination and the sounds of silence in Brussels

The reaction of EU foreign affairs minister, Josep Borrell, “shocked and appalled by the death of George Floyd", was prompt and forthright, and he correctly denounced the killing as “an abuse of power”. While such a condemnation of lethal anti-Black racism in the USA is welcome and needed, it does leave the Euro-mandarins exposed to charges of abject hypocrisy.

Their inept policy responses and refusal to recognise the racism that is embedded in the European way of doing things, are symptomatic of a wider deficit. As Gary Younge put it, “a selective amnesia about their own imperial legacy leads ineluctably to a false sense of superiority around racism among many white Europeans toward the US.”

What is especially telling is the cluelessness at the apex of European Union institutions that the failure to reflect the diversity of 21st Century Europe in their staffing might actually be an issue. According to ENAR, despite the fact that at least 50 million people of colour are estimated to be living in Europe, when it comes to EU staff, there are: “Zero data on racial diversity in the EU institutions; Zero specific measures to ensure racial diversity; Zero people of colour in senior management positions.”

Even more jarring is the official silence in Brussels concerning the hate speech and blatant racism that comes from prominent political leaders in member states. When challenged by anti-racist organisations to react to the words and deeds of Europe’s own repulsive cluster of nativist authoritarians, EU officials avoid condemning particular prominent racists. Instead they routinely confine themselves to generic condemnations of racism in general, expressions of concern, and vague commitments to monitor developments.

By all means necessary consistent with non-violent struggle

The uprisings across the USA, and the demands to recast the social contract so that Black people can no longer be murdered with impunity, have engendered a long overdue, but very public recognition that racism is far more than the sum of the ravings of individual racists. There is a lesson for Europe in the calls to defund, dissolve and abolish the racist structures responsible for the oppression and immiseration of Black communities across the USA.

Across Europe, public authorities, parliamentary groups and international agencies that claim to be liberal and enlightened, need to interrogate their structures and operations to root out the whole gamut of rotten practices that have excluded or side-lined racialized minorities; more than that, they must become actively anti-racist in the pursuit of justice for all. In short, whoever deploys racism to wield power and subjugate others must be publicly and forcefully held to account, by all means necessary that are consistent with non-violent struggle.

Hubristic claims that Europe is somehow superior when it comes to race-related issues, compounded by historically illiterate assertions about the European tradition of protecting minorities, will take us nowhere. Those EU leaders who express solidarity with Black Lives Matter must commit to rooting out the racism that blights the lives of ethnic minorities across Europe. In an era when racism has been politically mainstreamed in illiberal member states of the EU, there is no time for equivocation or dithering, and absolutely no room for denial.