COVID-19, the EU and the rule of law: Colour-blind consultations just don’t cut it 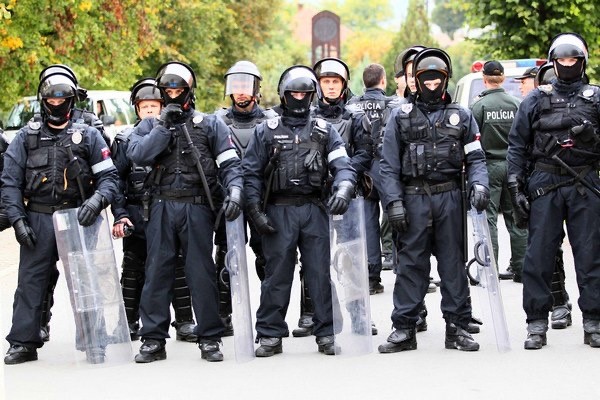 The same week that shocking video surfaced from Romania of Roma, trussed up and face down in the dirt, being beaten by special force police officers, the European Commission was seeking strategic stakeholder feedback on the rule of law, “factual information on developments on the ground in the Member States.” The video, in which the screams of one victim were clearly audible as special force officers struck him with batons on his bare soles, was more reminiscent of Pinochet’s Chile.

Days later, news of another incident surfaced, this time it involved an attack by a police officer in Slovakia, who beat five small Romani children with his truncheon and threatened to shoot them. In the midst of this pandemic, more and more cases of police brutality against Roma are surfacing amidst quarantines, lockdowns and emergency measures across central and eastern Europe.

But peruse the questions posed concerning the rule of law in this consultation, and you’ll look in vain for any mention of racial discrimination in the justice system; you’re not going to find any mention of racially motivated violence by law enforcement. Start from the very basic and banal precept that how a question gets framed, determines to a large extent the kind of answer you’re going to get, and it’s clear that the Commission’s rule of law surveyors don’t have racialised minorities in mind.

Basically, if you omit any mention of racism and discrimination from survey questions, you’re less likely to get replies that deal with racism. If the only box in the survey where police beating and torturing racialised minorities can fit, is the one marked ‘other’, the inference is clear. For this annual review, racism is pushed to the periphery of EU concerns, as stakeholders are urged to focus on “justice systems, anti-corruption framework and media pluralism.”

The rule of law is one of the foundational common values of the European Union, and Article 2 reads “The Union is founded on the values of respect for human dignity, freedom, democracy, equality, the rule of law and respect for human rights, including the rights of persons belonging to minorities.” What’s happening now to Roma, and indeed what was routine before COVID-19, makes a mockery of the notion that these values apply to minorities, or that pluralism, justice and solidarity prevails in all Member States.

In 2020, any rule of law review worth its salt must include specific questions designed to solicit “factual information on developments on the ground” that reflect the experience of racialised minorities, migrants and refugees across Europe. This one didn’t. Racism and the rule of law cannot be confined to specific ‘minority silos’ – it’s high time for ‘mainstreaming’, because the rights and security of minorities must be at the heart of European values; it’s not an optional extra, or something to be squeezed into the box marked ‘other’.

The ERRC submission highlighted that too often, good judgments do not lead to justice, the emblematic case of justice delayed and denied being racial segregation of Romani pupils in schools. The most recent, and most serious attempt to undermine the rule of law on this issue, was made by Hungarian Prime Minister Viktor Orbán in January 2020. In a series of racially charged broadcasts, Orbán announced a national consultation to challenge a court ruling that awarded Romani families from Gyöngyöspata 80 million HUF in compensation for a decade of school segregation.

The submission cited Roma Civil Monitor findings that official bodies responsible for combating discrimination in those countries with significant Roma populations are circumscribed in terms of independence, resources and mandate. The bodies’ ineffectiveness is compounded by a dearth of ethnically disaggregated data, a low level of rights-awareness among many marginalised Roma communities; who for their part harbor a well-gounded scepticism and mistrust concerning enforcement of judgements, and indeed the very possibility of justice or effective remedy.

Concerning police violence, the ERRC submission asserted, “If racist violence and misconduct against Roma is routinised in normal times in countries such as Slovakia, Romania and Bulgaria, where police operate with a sense of impunity, there is a high probability that under cover of the Covid-19, emergency measures could spell open season for racist members of law enforcement in these countries.”

COVID-19 and the state of exception

The submission cited examples of police brutality and echoed the condemnation by the Council of Europe of “the selective application of confinement measures on the basis of ethnicity”. UN experts have warned of the dangers of executive overreach in a state of exception, and the tendency for extraordinary powers to become part of the ordinary, normal legal system, moves which render the protection of rights "increasingly fraught and difficult."

These latest reports of police brutality in the submission suggest that for Roma the situation has become fraught, difficult and downright dangerous. In addition to the humanitarian crisis facing vulnerable Roma communities, there is a grave danger in these fearful times that nativist, far-right politicians will further incite racial hatred by labelling Roma as an existential threat and a source of contagion.

There are valued allies of Roma inclusion within the European Commission, but beyond the Roma ‘silo’, it is still not clear whether the basic point has begun to sink in, that it’s not a ‘Roma problem’, but one of racism in majority society, and deeply embedded institutional and structural discrimination. In this context, simply leaving out racism from a rule of law survey is a very telling form of myopia.

Such omissions and elisions, whether intentional or unintentional, could be said to constitute institutional discrimination, and serve as a reminder that EU institutions are neither diverse nor representative, and are falling way behind in their responsibility to ensure that the staff of the institutions reflect the diversity of the EU population.

In addition to the shortcomings of a colour-blind approach, there is another question concerning the utility of the whole exercise. ‘Strategic stakeholders’ might well ask what will come of all this consultation and annual reviews of the rule of law, while the likes of Viktor Orbán repeatedly shred the values espoused in Article 2 without consequence.

The pallid responses from the European Commission to the Hungarian Prime Minister’s recent power grab came as no surprise. For over the past ten years, a crude nativist politics combined with state capture, deep corruption and the steady dismantling of checks and balances has proceeded apace, while the EU effectively stood by on ‘mute’. Without any hindrance from the Union, the regime attacked press and academic freedoms; waged hate campaigns against minorities, refugees and migrants; harassed civil society groups and demonized legitimate opponents as traitors and enemies of the nation.

Many committed anti-racist activists and supporters of the rule of law are concerned that we’re on the road to nowhere – the voluminous stock of knowledge that has been produced, the research, reports and countless recommendations studiously compiled over the years for the EU, needs to surface in concrete policy-making. Consultation cannot be an end in itself; it must be a prelude to meaningful action; and any action on the rule of law must take full account of the experience of racialized minorities, including migrants and refugees.