Italy: Four police officers accused of torture and lies in the ‘Hasib case’ 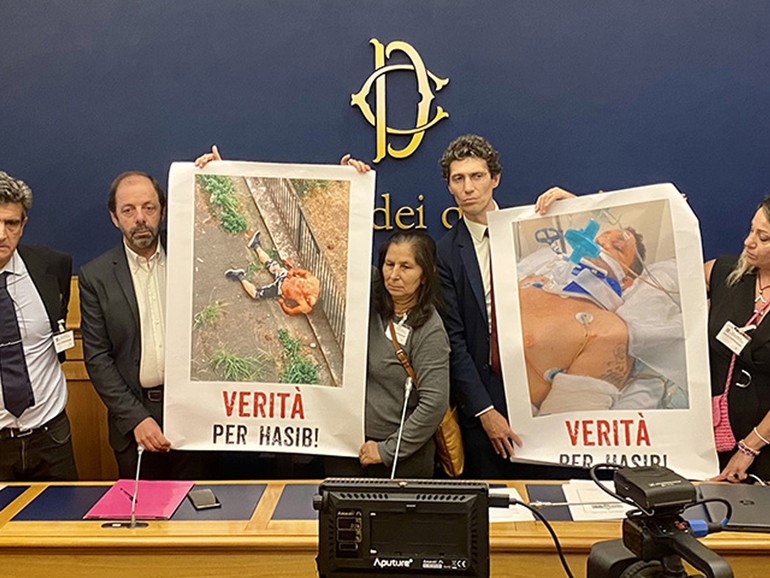 Four police officers under investigation following a house raid, which left a 36-year-old Romani victim in a coma, now face charges of torture, giving false testimony and attempted murder. Hasib Omerovic, who has been deaf since birth, sustained serious injuries when he ‘fell’ nine metres from his bedroom window during an unauthorised police raid on his apartment on 25 July 2020. Hasib is still in an intensive care neurorehabilitation ward in a condition of ‘minimal consciousness’.

In response to a parliamentary question by Deputy Riccardo Magi concerning progress with the investigation and measures taken against the offending police officers, Nicola Molteni, Undersecretary of State at the Ministry of the Interior responded on 18 November that the public prosecutor's office at the court of Rome has: “initiated a criminal proceeding for the crimes of false information to the public prosecutor, false ideology committed by public official in public deeds and torture, delegating the mobile teams of the Rome police headquarters to the related investigations.”

As regards the charge of providing false information to the prosecutor, the police officers claimed in their initial statement that Hasib Omerovic, "threw himself from window falling into the internal courtyard of the building, where he was then rescued by the 118 who transferred him to the Gemelli hospital".

This was completely at odds with Hasib’s sister’s account of what happened: "I opened the door and a woman and men dressed normally entered, the woman closed the door of the hall, asked for Hasib's documents, took the photos, they beat him with the stick, Hasib fell and started punching and kicking him... he ran into his room and shut himself up ... they broke the door ... they punched and kicked him, took him off his feet and threw him down."

Neither does the police account square with the state of the apartment when the family returned that fateful morning to find their home in disarray, Hasib's documents scattered on a table, the door to his room smashed, a broom handle broken in two; in addition, a radiator pipe had been wrenched from the wall, window shutters forced open, and they found traces of Hasib’s blood on a sweatshirt and his bedsheets.

In his parliamentary question Deputy Magi also asked if “due to the seriousness of the crimes and the unlawful acts that emerged from the investigations, precautionary measures have been taken against the suspects."

As reported by Associazione 21 luglio, Undersecretary Molteni replied that since criminal proceedings are still pending in the preliminary investigation stage, and are covered by investigative secrecy, no disciplinary proceedings have been initiated against the officers involved in the unauthorized raid.

Carlo Stasolla of Associazione 21 luglio, warned that the failure to suspend the officers from duty pending the investigations, runs the risk of minimizing the gravity of what happened on the morning of July 25 in the Primavalle apartment, and the state falling short in finding the whole truth as demanded by Hasib's mother, Fatima Sejdovic.

For more background on the case see: http://www.errc.org/news/italy-disabled-romani-man-in-a-coma-after-police-raid---victims-mother-demands-truth-and-justice