Antigypsyism After the Holocaust 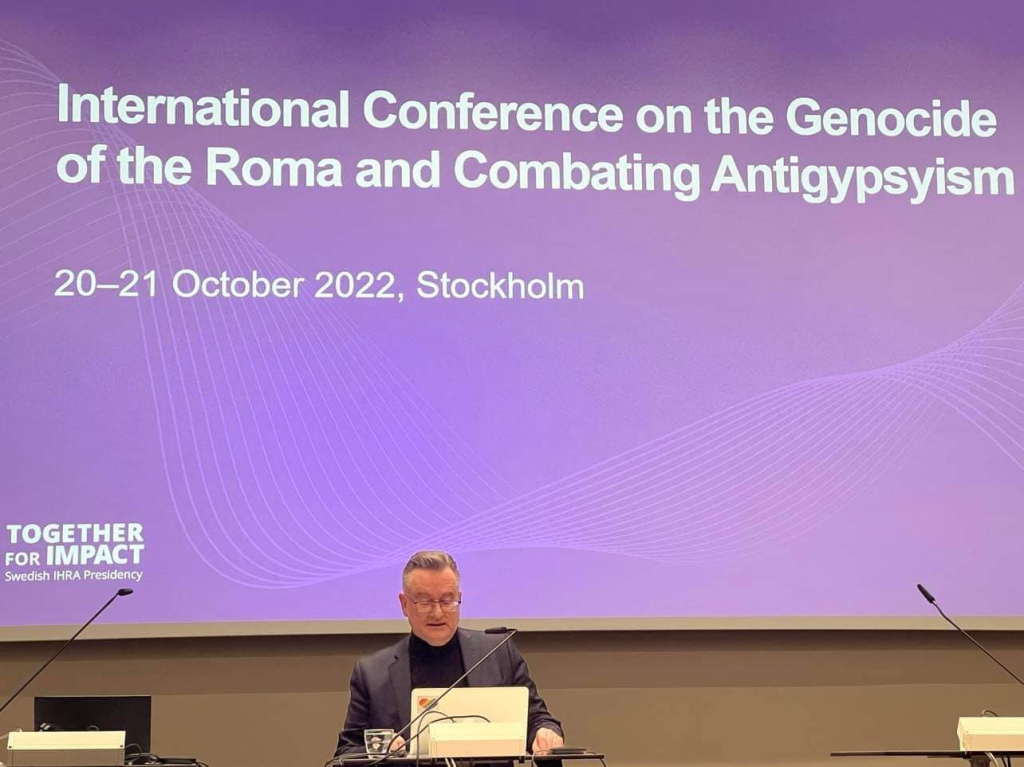 On the 18 August 2022, a staff member at a reception centre for refugees in Moldova, allegedly told Roma refugees: “I am fed up of you disgusting gypsies, I want to get rid of you once and for all.” Security guards turned up, ordered the Roma to leave, turned out the lights and sprayed them with tear gas. Elderly people and children were overcome and needed to be treated by paramedics. The victims have issued a criminal complaint, and the ERRC will represent the litigants.

Monitoring by the ERRC in the countries bordering Ukraine since the Russian invasion and the outbreak of full-scale war, shows that despite the massive solidarity shown to refugees in general, when it comes to Romani refugees in particular, racism doesn’t vanish during wartime.

Roma have faced discrimination on the borders, ethnic profiling and verbal abuse, and some families have been refused assistance. Roma refugees have been left stranded in railway stations, placed in makeshift camps or segregated and overcrowded reception centres. Authorities and others claim that Roma fleeing war are not ‘genuine refugees’, they’re just crossing the border for hot food and sandwiches, and any humanitarian aid that’s going.

These may seem to be isolated incidents in the context of the biggest refugee crisis in Europe since the Second World War. But the history of antigypsyism in Europe suggests otherwise, as does the fate of Roma IDPs and refugees from the war in Kosovo.

‘A continuation of a brutal and largely unknown history of repression’

Back in 2000, despite being refugees fleeing war, despite fleeing coordinated pogroms, burnings, rapes and killings, Romani asylum claims were met with scepticism and suspicion by various authorities. They were classed as bogus economic migrants, nomads on the move and on the make. UNMIK saw fit to house displaced Romani women, children and men in toxic, lead-contaminated camps for a decade.

In the years that followed this forced migration of tens of thousands of Roma, EU member states saw fit to initiate forced removals and returns of Roma to Serbia and Kosovo that were as pitiless as they were unsustainable.

The abuse and mistreatment of Roma fleeing conflicts is just one more manifestation of antigypsyism. To quote Thomas Hammarberg, what we witness today is a continuation of a brutal and largely unknown history of repression of Roma going back several hundreds of years. After the Holocaust, what is most disturbing is how, without any sense of shame, state institutions and political leaders perpetuate racism against Roma, and how the majority remain indifferent to the plight of their fellow citizens.

Away from war zones, antigypsyism in countries at peace also puts Romani lives in danger. The recent ERRC report on police violence against Roma in six EU Member States shows that all too often there is impunity for law enforcement concerning brutality against Roma. The extent of such violence demonstrates that anti-Roma racism is endemic and systemic within the ranks of officers paid to ‘protect and serve’.

The case files in this report comprise a catalogue of official lies and botched investigations, testimonies concerning incidents of excessive, arbitrary, and sometimes lethal violence against young and old, deliberate attempts to discredit and intimidate Romani victims, and protracted struggles through the courts for remedy, where justice for Roma is often denied and always delayed.

Without access to justice and effective mechanisms to hold law enforcement agencies accountable for their racist violence, institutional discrimination will remain solidly intact across the European Union.

ECRI’S latest report on Bulgaria described Roma and LGBTI persons as the main victims of hate speech often by high-ranking politicians; noted that Roma were frequently targeted by mob protests and attacks on entire Romani neighbourhoods, which led to the demolition of Roma houses, and noted that positive steps taken by the government to counter antisemitism have unfortunately not been applied to these types of hatred as well.

Across Europe, growing far-right mobilization against ‘ethnic replacement’, multiculturalism and minorities, means that Roma – almost 80 years after the Holocaust – will continue to be singled out for collective blame and collective punishment by cynical nativist politicians and neo-fascist mobsters; victims of public cruelty, often orchestrated with official connivance, targeted because of their pariah status and their ethnicity.

Beyond the hard core of haters, anti-Roma hate speech contaminates the public sphere in a manner that inhibits any sense of solidarity or empathy; the cumulative effect is that majority populations acquiesce with a noxious consensus that ‘Gypsies get what they deserve’, and fail to recognize mistreatment of Roma as racism.

The burden of responsibility

In the face of a toxic and virulent racism that insults the dignity, and imperils the security and well-being of millions – a racism undiminished and unabashed, despite a 20th Century history of erasure and genocide – the message for the 2020s and beyond is simple: it’s not enough to be non-racist, anti-racism must be the starting point; and those who choose to remain silent stand accused of complicity. These days call for an active rejection of the systemic oppression that arises out of institutional and structural forms of racism.

While Roma-led activism is the way forward for emancipation, the burden of responsibility to dismantle racist injustice lies with those who wield power and privilege. As the powerful are unlikely to do so of their own accord, at the ERRC we assert that they must be pushed and prodded; they must be sued and shamed; those who wield power for unjust ends must be publicly and forcefully held to account by all means necessary that are consistent with non-violent struggle.

Banal though it may sound, in the 21st Century, regrettably and tragically, it’s still necessary to insist that Roma rights are human rights, and that Roma lives matter. In 2022, any liberal agendas that fail to register these basic truths, are unworthy of the moniker ‘liberal’. If after all this time, so-called enlightened organisations – whether wittingly or unwittingly – remain hostile environments for Roma, and ambivalent on the ethical imperative to combat antigypsyism and all forms of racism, then clearly, they are still part of the problem. In these dark times there is no room for ambivalence.

Recognition is vital, remembrance is crucial. But what follows recognition? There needs to be redistribution, reparations and respect: access to justice as well as clean water and sanitation, access to quality integrated schooling and health care; freedom from fear, forced evictions and political terror; and measures to ensure that equal opportunities and equitable outcomes prevail in all public spheres, to make amends for centuries of oppression. And that’s just for starters.

One of the ways to honour the memory of those who perished and those who survived the Holocaust, is for states to ensure that current and future generations of Romani children and young people will enjoy equal rights and opportunities, will know what it is to be respected, and not reviled, for who they are; and that these generations can face the future with hope for a better day.

(This text is adapted from a speech delivered in Stockholm at the International Conference on the Genocide of the Roma and Combating Antigypsyism, 20-21 October 2022, hosed by the Swedish IHRA Presidency)