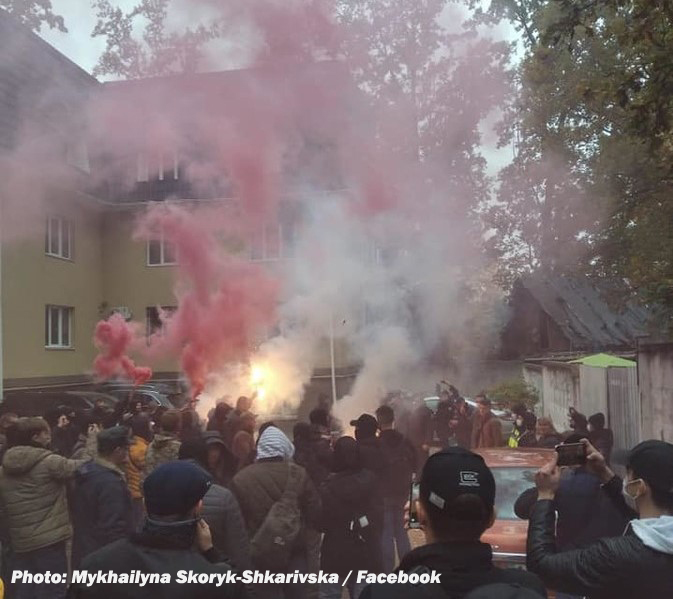 Around 50 members of Ukrainian far-right groups (including C-14, Right Sector, Svoboda, and the National Corps) attempted to attack homes belonging to Roma on Sunday 17th October. The protestors let off flares, threw smoke bombs, and chanted “death to drug-dealers” while police officers formed a protective line to stop them getting into the Roma-majority neighbourhood in Irpin, a town around 20 kilometres from Kiev.

The action was organised in response to a conflict between two Romani teenagers, aged 16 and 17, who reportedly attacked a 22-year-old Ukrainian soldier on the evening of 15th October. According to Irina Pyanishnikova, the spokesperson of the National Police in the Kiev region: "…there was a case when two representatives of the Romani people caused light bodily harm to one of the inhabitants of Irpin. We have opened a criminal investigation.”

The protest which began at around 3:00pm lasted until the evening. Attempts to storm Romani homes were successfully denied by the strong police presence at the protest, which included officers from the district police department, the preventive activities department, and special forces as well as the leader of the Kiev police region who was present at the scene.

While no violence occurred, the intimidation of an entire Romani community based on the actions of two teenagers is only the most recent example of collective punishment at the hands of an angry mob in Ukraine. In recent years, Romani communities throughout the country have been subjected to similar intimidation, often led by the same far-right organisations who were present at the protest on 17th October. In some instances these actions have led to pogroms of entire communities due to allegations against individual Romani people. In 2018 and 2019, there was a spate of at least 6 pogroms and far-right attacks on Romani people across Ukraine. An attack on 23rd June 2018 was fatal, when members of the far-right group Lemberg Jugend (Lviv Youth) killed 23-year-old Romani man, David Popp, outside of Lviv.

In this case the police acted competently and responsibly, preventing serious violence or damage to property. Too often this is not the case in Ukraine. In August 2016, police stood by and watched in Loshchynivka while villagers destroyed Romani homes and drove the entire Romani community from the village. In May 2018, national police failed to protect Roma in Lviv from an attack by masked men who dragged them from their living place, beat them, and set their makeshift homes alight. In April 2018, far-right groups C-14 and the “Municipal Guards” drove fifteen Romani families from their makeshift homes in the Lysa Hora nature reserve in Kiev, seemingly on the authority of the local police and the district administration. Far-right thugs, carrying weapons, chased down fleeing parents carrying small children, threw stones at them, and then set fire to the tents where the Roma had been living.  The groups were acting on a memorandum of cooperation signed with both the Holosiyiv District Administration and the Holosiyiv National Police in December 2017 to provide security services. More recently in April 2020, police and the public prosecutor failed to open a criminal complaint after a Romani family were beaten and had their tents set alight in Kiev.

Considering the history of collusion and negligence, Roma in Ukraine have little reason to trust the police will protect them from far-right attacks. The action of the officers who attended the far-right protest on 17th October should serve as an example for how to deal with incidents of racist intimidation of minority communities. The National Police will need to do a lot more than this however, to begin to win back the trust of Romani communities in Ukraine. As one Romani woman said to an ERRC human rights monitor, after her home was burned down by armed men in Velyka Berezovytsia, Ternopil:

Although no criminal acts were committed on 17th October due to the police protection of the community, the local police have wasted no time in opening proceedings against the two Romani teenagers. The offenders are to be charged under Part 1 of Art. 125 of the Criminal Code for causing “Light Bodily Harm”. The maximum penalty is a fine of up to UAH 850, public works up to two hundred hours, or up to one year in prison. It would seem that the national police of Ukraine can actually be quite efficient in investigating and charging offenders involved in violent crimes, as long as the perpetrators are Roma instead of neo-Nazis.